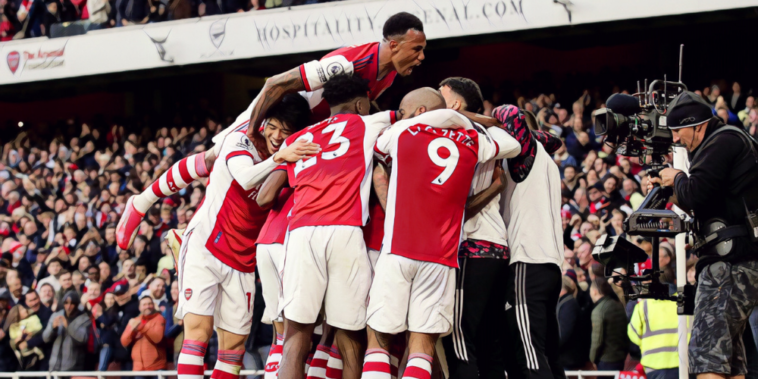 As the final whistle sounded on Arsenal’s defeat at Manchester City in August, Mikel Arteta stood on the brink, his side bottom of the Premier League following a chastening 5-0 defeat at the Etihad.

The manner in which the Premier League champions ruthlessly exploited his side saw the critics come out in full force, with Arteta and technical director Edu feeling the wrath of an unsettled fanbase, one which had grown tired of an ineptitude in performances.

As the first international break of the season commenced there were serious doubts over whether Arteta would remain in power when the Premier League season resumed, but fast forward a little over two months and there is a much rosier picture at the Emirates.

Arsenal are unbeaten since that defeat in Manchester and the club’s summer recruitment drive – one criticised widely in the early part of the season – is beginning to show signs of shrewd investment.

Aaron Ramsdale has been a revelation since claiming the number one shirt in Arteta’s side, the 23-year-old’s distribution having provided Arsenal with greater options from the back, whilst he boasts the second-best save percentage in the division and five clean sheets from just eight fixtures.

Ben White has also looked more confident with each passing performance, bouncing back from a shaky start during the opening weekend defeat to Brentford to look more and more like the composed, ball-carrying centre-back Arteta had identified.

Elsewhere Albert Sambi Lokonga and Nuno Tavares were signed as players for the future but have shown encouraging signs in the immediate, whilst Takehiro Tomiyasu has become a fans’ favourite with his determined displays at right-back.

Since the start of September no side in the Premier League has accumulated more points than the Gunners, their haul of 20 across that period seeing the North London side rise to fifth, just two points outside the Champions League places.

It has been a remarkable turnaround for Arteta and his side, who must be growing in confidence that the club can secure a top-four finish and end a five-season exile from Europe’s elite.

Even after the worst Premier League start in the club’s history, the Gunners are already seven points better off than at the same stage last season, whilst the performances of those around them will offer encouragement in their top-four pursuit.

Chelsea, Manchester City and Liverpool all remain strong and are expected to contest the title, but the likes of Burnley, Crystal Palace and West Ham have all recently shattered the aura of invincibility that has surrounded the Premier League champions of recent seasons.

Manchester United continue to roll from one crisis to another, whilst Leicester have failed to replicate last season’s performances and Tottenham – even amid the wave of optimism following Antonio Conte’s appointment – remain in transition.

West Ham have emerged as viable contenders and sit third, though are perhaps one ping of Michail Antonio’s hamstring away from seeing their chances significantly diminished.

Goals remain the greatest issue for Arsenal, whose new-look defence have made positive strides, particularly Gabriel who, having now gone 220 days without a defeat for the Gunners, has earned inclusion in the Brazil squad for the first time.

It’s a different story at the opposite end of the pitch, however, with Emile Smith Rowe’s recent purple meaning the midfielder is now one of just two players – alongside Pierre-Emerick Aubameyang – to have scored more than once in the Premier League this season.

The 21-year-old – called into the senior England squad for the first time this month – has six goal involvements (four goals, two assists) since the start of September, the most of any English player in the division.

However, the Gunners will need contributions for elsewhere to mount a sustained top-four push, having scored just 13 goals from their 11 fixtures to date.

That figure leaves Arteta’s side joint-10th for goals scored alongside Brentford, whilst their failure to create regular clear-cut chances means Arsenal rank only ninth for expected goals (xG) with 15.20, a metric that must surely improve if recent results are to be sustained.

Arteta has utilised a front pairing of Alexandre Lacazette and Aubameyang in recent weeks and whilst neither forward is firing as prolifically as previous seasons, each are playing a role in a team showing greater signs of cohesion than in the early part of the Arteta era.

It is a sign of the adaptability that Arteta possesses in moving to a 4-4-2 formation, a decisive change that has left summer signing Martin Odegaard without a clear role in the side.

Aubameyang was criticised last season following a series of ineffective performances for the Gunners, but has led by example this term with hard-work in leading the line.

The 32-year-old ranks sixth amongst Premier League forwards for final third pressures this season (77), whilst his statistics for tackles (0.4 to 1) and shots (2 to 2.5) per 90 minutes have risen noticeably since last season.

Four goals from nine starts represents a solid if unspectacular start to the season for Aubameyang, who will hope to find his form of old around goal as the spearhead of a side brimming with youthful promise.

With Lacazette operating alongside him, Arteta will hope his experienced pair can provide the goals to maintain Arsenal’s recent upturn in performances, ahead of what could prove a defining period in their Champions League challenge.

Arsenal return from the international break with a trip to face Liverpool at Anfield on November 20, before heading to Old Trafford before the end of the month.

Positive results in either or both fixtures will add to the increasing optimism that Arteta and Arsenal are capable of lasting the distance.