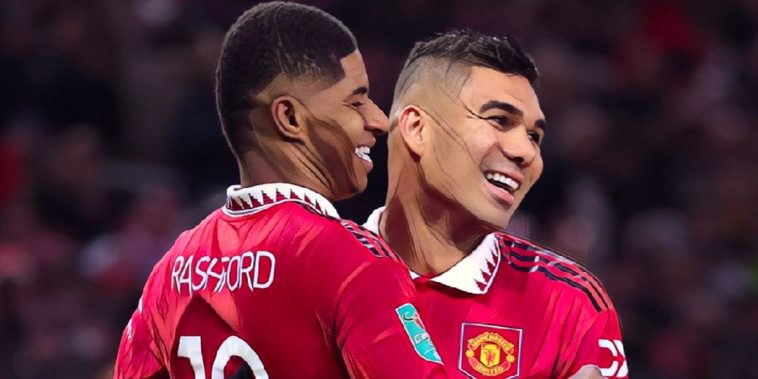 Mikel Arteta is wary of the threat posed by Manchester United as the two sides renew rivalries in the Premier League this weekend.

Arsenal and United’s rivalry was one of the defining features of the Premier League’s early years, with the pair sharing 11 of the 12 league titles on offer between the 1992/93 to 2003/04 seasons.

After spells out of the limelight, both sides appear to have somewhat turned a corner this season, with Arsenal coming into the game five points clear at the top of the table and Manchester United currently sitting in third.

United won the first meeting between the two sides back in September, and in Marcus Rashford, they have one of the form players in the division in their ranks; the England international having scored eight goals and provided two assists in the eight fixtures since the World Cup.

Speaking at his pre-match press conference, Arsenal boss Mikel Arteta was asked about Rashford’s form, but warned that United have a lot of dangerous players as well as a ‘collective organisation’ that makes them a threat.

“It’s not only him, unfortunately,” Arteta said. “There are a lot of individuals and the collective organisation that we have to be very aware of. We prepare the games to try to hide what they have to try to create a problem against us.”

One player who has been influential to United this season is Casemiro, though the Brazilian will be missing for the clash at the Emirates after picking up his fifth yellow card of the season in United’s 1-1 draw with Crystal Palace.

However, Mikel Arteta was again quick to downplay the 30-year-old’s absence, especially given that he didn’t play in United’s 3-1 win over the Gunners earlier this season.

“Again, it’s something that we can’t control,” said Arteta. “He didn’t play in our first game either and we still didn’t do enough to win that match.

“When you look at the squad that they have, it’s just incredible. The individuals and the collective organisation can beat any opponent in this league and we’ll plan the game knowing that [Casemiro] is not available, that’s for sure.”

One player who could be involved, however, is Arsenal’s new signing Leandro Trossard who joined the club from Brighton on Friday.

“He trained today, so hopefully [he can play],” said Arteta. Asked if the paperwork was finalised before the 12pm deadline, he added: “Yes, I think it is. I think he’s good to go.”