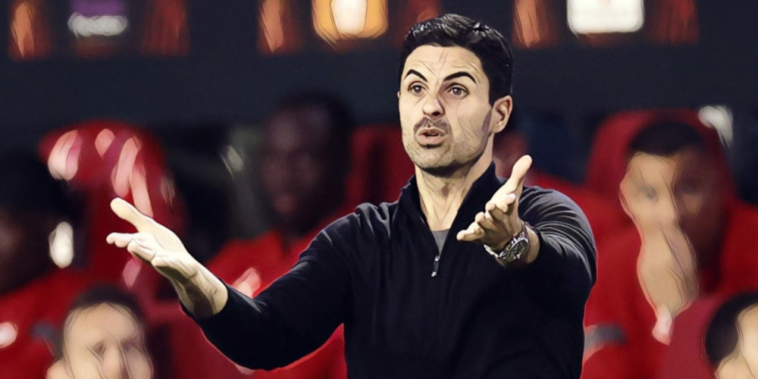 Mikel Arteta has urged Arsenal to bounce back after the club’s unbeaten run came to an end at PSV Eindhoven.

The Gunners needed just a point to secure their Europa League progress as group winners, but lost 2-0 on a disappointing evening in the Netherlands as goals from Joey Veerman and Luuk de Jong condemned Arsenal to a first European defeat of the season.

PSV also had three goals disallowed in a dominant performance and Arteta admits he was disappointed with the level of his side in Eindhoven.

“It’s the end of a long run, the first defeat after a long period,” Arteta told his post-match press conference.

“It’s time to reset, to analyse what happened. Congratulations to PSV – they were the better team and they deserved to win the game. There’s no question about that. We were nowhere near our level, especially the way we competed.

“Even though we had periods where we controlled the game, I didn’t feel that we had the threat and the aggression that we’ve been playing at.

“That was worrying. In the second half, the moment something went wrong, we just went down and we didn’t really find moments to give us some hope to react and get something out of the game.”

The defeat brought an end to Arsenal’s nine game unbeaten run across all competitions and followed another flat performance in the 1-1 draw at Southampton last weekend.

Arteta believes his team has performed above all expectations this season, but insists it is his responsibility to ensure the Gunners respond against Nottingham Forest this weekend.