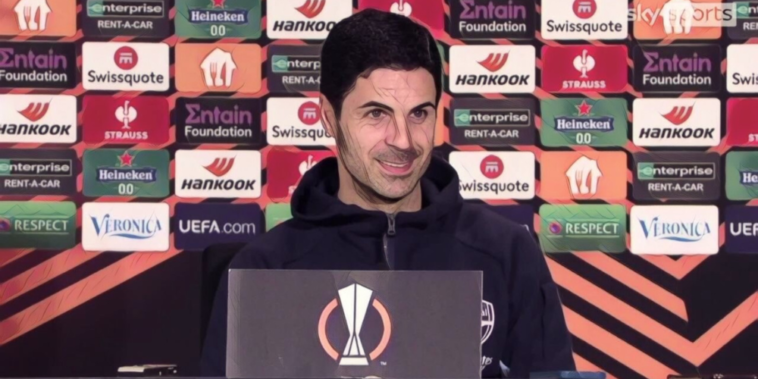 Mikel Arteta says finishing top of the group is important for Arsenal ahead of the Europa League’s knockout rounds.

Arsenal travel to face PSV Eindhoven on Thursday evening and know a draw in the Netherlands will be enough to secure the Gunners’ progress as group winners. Winning the group provides teams with an automatic route into the last 16, with the runners-up facing a two-legged tie with one of the eight teams who drop down from the Champions League.

Barcelona are already confirmed as entrants after elimination from the Champions League, while the likes of Ajax, Atletico Madrid and Juventus could be among the teams to enter the tournament.

Speaking ahead of Arsenal’s trip to PSV, Arteta insists it is important that his team top the group ahead of what promises to be a ‘competitive’ knockout phase.

“Last week we made the first step to qualify to the next round, and now we need to win tomorrow because we want to finish first,” Arteta told his pre-match press conference.

“This competition is getting harder and harder and how it looks today and what the possibilities are, it looks like the next round will be extremely competitive. That’s why finishing first in the group and avoiding another two games is such an important thing for us.”

Arteta discussed his team selection for the clash and admitted his squad is stretched amid the congested fixture list.

“We don’t have that many players! We bring the players that we have and we have brought four kids with us so we cannot even make up the squad.

“We need to put 11 players out and they need to play – we cannot change those 11 players every game.”