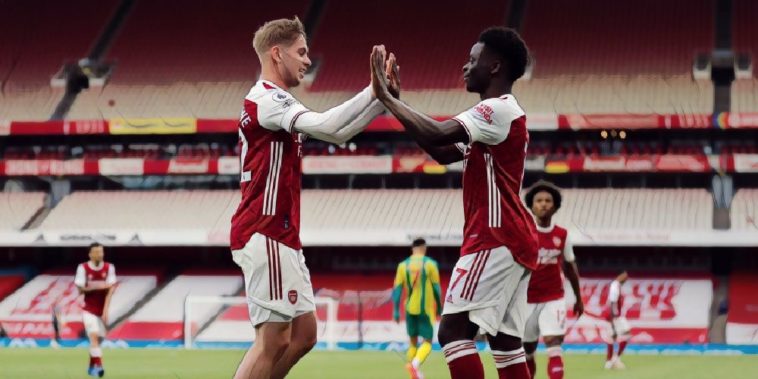 Arsenal got back to winning ways with a 3-1 victory over West Brom, the win condemning Big Sam Allardyce to his first-ever Premier League relegation.

West Brom came into the game knowing that anything other than a win would confirm their drop back to the second tier, and it would be a spirited opening from the Baggies. Callum Robinson saw an effort come back off the post while Matheus Pereira saw a well-struck effort go wide following a driving run from the left touchline.

Big Sam’s side were defending astutely, but in the 29th minute they were undone by a piece of quality. Willian slipped the ball to the overlapping Bukayo Saka down the left, the Arsenal number 7 delivering a cross in towards the near post which was met superbly on the volley by fellow academy graduate Emile Smith Rowe who fired his side ahead.

Six minutes later and the Gunners doubled their advantage, and once again it was a superb finish. Having picked up the ball on the right flank, Nicholas Pepe was allowed far too much time and space as he drifted inside, cutting in on his left before unleashing a howitzer of a strike beyond the helpless Sam Johnstone.

Arsenal should have had a third just before the hour mark, again Bukayo Saka overlapping down the left before fizzing a delicious cross across the box, but neither Martinelli nor Smith Rose could get onto the end of it.

West Brom would give themselves hope as Pereira netted a superb individual goal midway through the second half. The Brazilian picked up the ball centrally inside his own half and drove at the Gunners defence before finding the bottom right corner from the edge of the area.

Arsenal offered little following Pereira’s strike, but would extend their lead as the game ticked into added time following a needless challenge by Kyle Bartley. Summer signing Willian stepped up and whipped an excellent strike into the top corner to register his first Premier League strike for the Gunners.

Speaking afterwards, Mikel Arteta admitted his side looked ‘nervy’ and ‘struggled’ after Pereira’s solo strike in what was a vital win.

“We needed that win,” he told BT Sport. “It has been a while since we won at home. We scored three fantastic goals and we had some great spells in the game. When we conceded the goal we did look nervy.

“We knew the necessity to win the game. They scored out of nothing and then throw everything at you, they know the situation they are in and we struggled to play that kind of game.

“We scored three fantastic goals but we missed some big chances too.”

With Kieran Tierney and Granit Xhaka out, Arteta opted to play Bukayo Saka at left-back, with the youngster putting in an excellent display.

“Going forwards we know Saka is a threat, he gives you something unique,” Arteta said. “He adapted. We believed we were going to attack against them and he gave us a lot of joy.”

The result leaves Arsenal in ninth with three games left to play, the next being on Wednesday evening against Champions League and FA Cup finalists, Chelsea, the north London side retaining an outside chance of European qualification.

“Europe is a completely different game, different context. There were things we could have done much better [against Villarreal].

“We will try to win every match and see where we finish. The only thing we can do is win our games.”