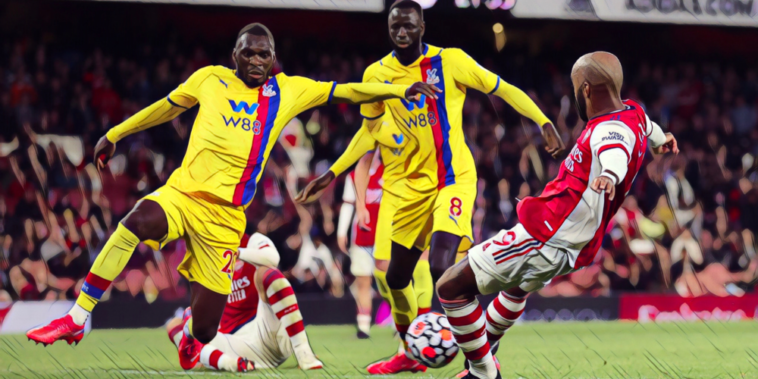 Alexandre Lacazette came off the bench to grab a 95th minute equaliser as Arsenal were held to a 2-2 draw by Patrick Vieira’s, Crystal Palace.

Having seen his side struggle for goals in the Premier League this season, Mikel Arteta seemingly threw caution to the wind as he sent out a very attacking lineup for the visit of Patrick Vieira’s side, the Spaniard selecting a single holding midfielder in the form of Thomas Partey behind a front five of Nicolas Pepe, Martin Odegaard, Emile Smith Rowe, Bukayo Saka and Pierre-Emerick Aubameyang.

That adventure was rewarded in just the eighth minute, Pepe playing a one-two down the right with Takehiro Tomiyasu, before the Ivorian curled an effort towards the far post with his favoured left foot. That strike was smartly kept out by the diving Vicente Guaita in the Palace goal, only for skipper Aubameyang to react quickest to fire Arsenal ahead from a narrow angle.

After the brisk opening, the game would settle down and Crystal Palace were afforded a bit of time to knock the ball about, although, despite enjoying the majority of possession, they struggled to produce much in the terms of end product and clear cut chances. Their best effort of the half would come right on the stroke of half time, Connor Gallagher forcing a smart diving save out of Aaron Ramsdale with a volley from the edge of the area after the Arsenal stopper had initially punched clear a corner.

Palace have regularly been better in the second half in the early stages of the season, and just five minutes after the break, they hauled themselves level. Some excellent pressing from the South London side forced Thomas Partey into a mistake, gifting the ball to Christian Benteke who shifted onto his right, before drilling home low into the bottom corner.

The Eagles continued to press and looked to get forward, and they would take the lead with 18 minutes left to play, on loan midfielder Gallagher winning the ball off Sambi Lokonga in his own half and driving towards the Gunners goal, exchanging passes with substitute Michael Olise along the way. Gallagher laid the ball off to Odsonne Edouard, before the former Celtic striker thumped the ball into the back of the net off the underside of the crossbar, though there must be questions asked of Ramsdale given that the strike was fairly central.

Gunners legend Vieira opted to bring on defender James Tomkins in place of Edouard as he looked to secure all three points, with Palace then sitting deep and looking to shut up shop.

The change would see Arsenal dominate, though it looked like it wouldn’t be their night, particularly as Kieran Tierney smashed a thunderous strike off the underside of the bar with three minutes to play.

However, in the fifth minute of added time, substitute Alexandre Lacazette – who had looked lively since his introduction – popped up to bag a last gasp equaliser, the Frenchman slamming home from close range following some penalty area pinball in the second phase of a corner.

Speaking afterwards, Mikel Arteta was delighted with his young side’s early play, before saying they lost composure, admitted it was ‘worrying’ so see how long the drop in performance level lasted before hailing the impact of his subs.

“We started the game very well, very dominant, really sharp. A lot of moments and threat,” he told BBC Sport.

5/6 – Five of Alexandre Lacazette's last six Premier League goals for Arsenal at the Emirates stadium have come in London derbies, including each of his last four. Leveller. #ARSCRY pic.twitter.com/daOwpMBTEK

“After the goal we didn’t manage the game well enough. We didn’t have composure or control. The game was stretched. You have uncertainty, you have to defend deep.

“We started better in the second half. We had more control then we gave the ball away two times for the two goals.

“The subs were terrific. The team never gave up. We had chances to score more.

“We took the goal the wrong way. They were having problems and we didn’t manage that well enough.

“It [the dip in performance] was for a long period which is worrying. We gave cheap goals away.

“In first half we lost the ball in difficult areas with simple passes.

“Alexandre Lacazette came on and made two or three positive actions. He lifted the players. You had the sense we would score.

“The most positive thing is we kept going. They kept believing until the end. That’s how we managed to get a point.

“I am disappointed with the result. We threw it away. When you score late in a game you always have to take the point. Much better than losing.”

The Spaniard was clear in his opinion of a first-half challenge by James McArthur on Bukayo Saka, which was only punished by a yellow card: “It’s a clear red card,” Arteta insisted. “No intention to play the ball. I don’t know how with VAR he hasn’t been sent off.”

Next up for the Gunners is a Friday night fixture against Aston Villa.