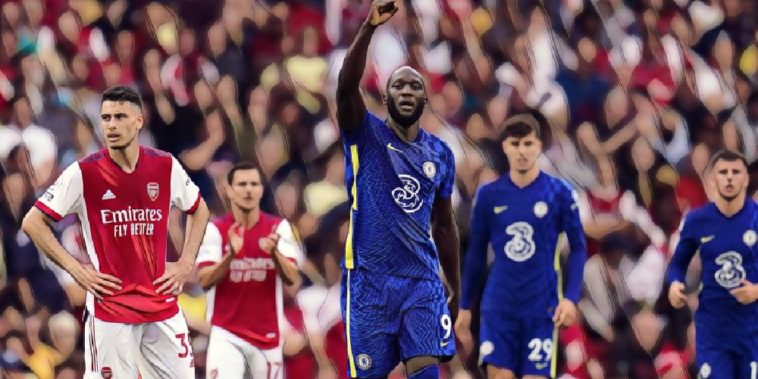 Arsenal’s slow start to the season continued as goals from Romelu Lukaku and Reece James helped Chelsea to a 2-0 win.

It was a somewhat frantic start to proceedings in North London, with both sides fashioning early opportunities in front of a feverish and hopeful crowd at the Emirates.

However, it would be Chelsea who would strike the first blow, and having splashed out a club-record £97.5 million to re-sign Lukaku, the Belgian began to repay that outlay after just 15 minutes.

The former Manchester United man received the ball to feet, held off Pablo Mari with ease before laying it back into midfield. The ball was fed out to Reece James on the Chelsea right, and having pulled his man out of position, Lukaku darted into the box to tap home James’ cross from inside six yards.

Having set up the first, James netted the second 10 minutes before the interval. Arsenal players were seemingly being attracted to the very presence of Lukaku centrally, with the young Englishman finding himself in acres of space down the right as he received the ball from Mason Mount, before taking a touch and confidently firing past Bernd Leno.

Arsenal finished the first half brightly, and began the second in similar fashion, though they couldn’t capitalise on their spells of pressure as Chelsea’s defence held firm.

Lukaku, making his 16th appearance for the club, was a real handful throughout the game though and was stunned not to see the ball flying into the back of the net for a second time, Arsenal ‘keeper Leno acrobatically tipping the 28-year-old’s diving header onto the crossbar with 12 minutes to play.

Arsenal have lost both of their opening two games of a Premier League season without scoring for the first time in the club’s history.

Not the sort of record you want to set. 🙃 pic.twitter.com/mskuUSVKJL

Despite their second half improvement, Arsenal never really looked like getting themselves back in the game, and speaking afterwards, Gunners boss Mikel Arteta admitted his side were second best.

“They were the better team,” he told Sky Sports. “When they play at their best, which I think they did today, they are champions of Europe, have world-class players and to match at that level is difficult.

“You can always do things better. In the first half it took us a long time to regain the ball in wide areas. We concede two goals but the way the team responded and the crowd never gave up, it gave us hope in the second half.”

There were boos heard at both half time and full time as the club’s winless start to the season continued, though the Spaniard insists he was happy with the support from the Arsenal faithful.

“I see a lot of positives with the crowd today,” he said. “The way they supported the team from the beginning. I saw a good reaction. It is one of the difficult moments. The circumstances are difficult and unprecedented. Feeling sorry for yourself doesn’t help. You have to win football matches, keep it together and show spirit.

Next up for Arsenal is a trip to face West Brom in the Carabao Cup, before they look to finally look to get off the mark in the Premier League with an away day against Man City.

“Starting tomorrow in training with the players which did not play. We need to win the game midweek and that will help against Manchester City next weekend.”