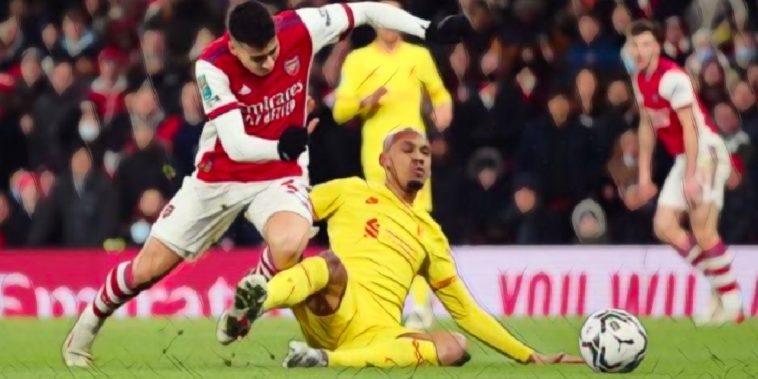 Arsenal’s hopes of adding silverware to their cabinet this season were ended as they suffered a 2-0 loss to Liverpool in the Carabao Cup semi-final second leg.

Having played out a goalless draw in the first leg last week at Anfield last week, it was Arsenal that started the brighter of the two sides at the Emirates, with an Alexandre Lacazette free-kick forcing a superb flying save from ‘keeper Caoimhin Kelleher who tipped the ball into the bar.

However, despite being without Mohamed Salah and Sadio Mane, it would be Liverpool who took the lead, Diogo Jota picking the ball up on the left before driving inside. The Portuguese brushed aside the challenge of Takehiro Tomiyasu before his scuffed effort seemingly wrong-footed Aaron Ramsdale who was unable to keep it out.

Both sides blazed efforts over the bar in the opening exchanges of the second half, while substitute Ibrahim Konate saw a header crash off the base of the post as both sides looked to add to the scoreline.

The second did eventually come with 13 minutes to play, however, Trent Alexander-Arnold halting an Arsenal breakaway down the left, before looking up and pinging the ball in behind the Gunners defence. His inch-perfect pass picked out the run of Diogo Jota who controlled on his chest before lifting it over Ramsdale, and while the assistant referee initially ruled it out for offside, VAR showed that the Portuguese had timed his run to perfection to give Liverpool a 2-0 lead.

Thomas Partey returned to the UK at lunchtime today following Ghana’s elimination from the African Cup of Nations, though having been brought on as a 74th minute substitute, the 28-year-old barely had time to get his kit dirty, as he foolishly received two yellow cards within the space of a couple of minutes to pick up the Gunners 14th red card since Mikel Arteta’s appointment.

Speaking afterwards, Arteta was left ruing Arsenal’s missed opportunities, as their hopes of silverware this season came to an end.

“Really disappointed, we wanted to be in the final,” he told BBC Radio 5Live. ”There are moments we had them and you have to score and take advantage in the tie. We hit the bar, lost big opportunities in big situations to finish the game off.

“We really believed we could do it, we created an incredible atmosphere, the players were excited so it is a hard one to take.”

The Spaniard praised the efforts of a number of his side who played today despite a lack of pre-match training, Arsenal having been forced to request a postponement for last weekend’s North London derby due to a lack of players.

“It was remarkable what five or six players have done to be available today without training. Thomas Partey tried to help but we ended up with 10 men. He has experience, knows how we have to play but we played three times this year with 10 men.

“It is evident the squad is short and we are trying to work on that.”