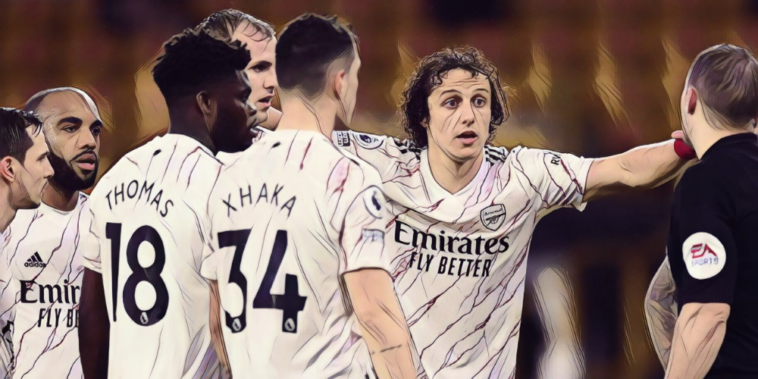 Mikel Arteta insists he has a ‘positive feeling’ despite seeing Arsenal’s seven-game unbeaten run in the Premier League come to an end with a 2-1 defeat at Wolves.

Arsenal crashed to defeat at Molineux in a game that saw the Gunners have two men sent off, Wolves making their advantage count by coming from behind to secure a much-needed three points.

It was the visitors who started the brighter with Arsenal twice hitting the woodwork and having a goal disallowed before Nicolas Pepe’s fine individual effort opened the scoring, though the game turned on the stroke of half-time as David Luiz was sent off for bringing down Willian Jose in the penalty area.

Ruben Neves stepped up to score from the spot in emphatic fashion, before Joao Moutinho’s stunning effort from distance put Wolves ahead for the first time just four minutes after the restart.

Arsenal’s hopes of a comeback were all but ended following a moment of madness from goalkeeper Bernd Leno, the Germany international misjudging the flight of the ball to handle outside his area and receive his marching orders.

Arteta reckons his side were unfortunate not to have the game won before Luiz’s red card changed the course of the match, questioning the referee’s decision to dismiss the defender before insisting he was encouraged by his side’s overall performance despite the defeat.

“The team was really on top of the game, we should have been three or four-nil up and in that action [the Luiz red] the game changed completely,” Arteta told BBC MOTD.

“The team kept trying, kept playing, kept believing. At half-time the boys were so animated because they believed they could still win the game. Obviously, it was an incredible goal from long range, before that they didn’t have any chances. But still we lost and we have to react.

“We hit the post, hit the bar, the keeper made a couple of great saves. We played exceptionally well, scored one goal and should have scored three or four and had more of a gap, but obviously you concede two red cards in the Premier League. I don’t have any [complaints about] the second red card

“The team is encouraging me every day to believe in them and to give me a positive feeling all the time.”

Read Also – Edinson Cavani, the luckiest signing of the season, has been an ideal fit for Man United