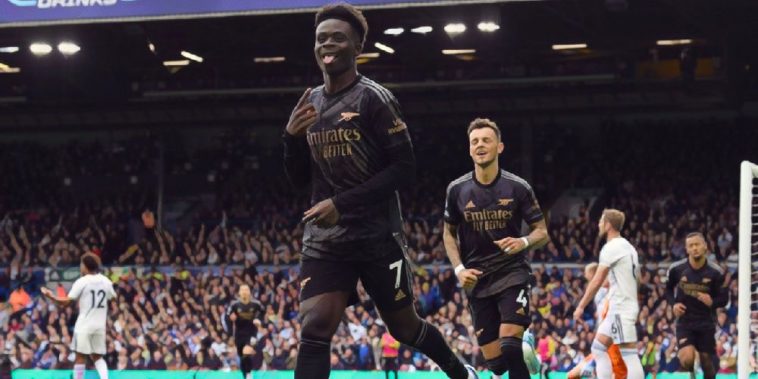 Arsenal extended their lead at the top of the Premier League following a 1-0 win over Leeds United at Elland Road.

The game got underway but was swiftly brought to a halt as a power surge disrupted the communications between the match officials that resulted in a 40-minute delay to proceedings.

Once the game finally got going, it was a fairly even affair, though it was the Premier League leaders that took the lead in the 35th minute. After Bukayo Saka picked up on a loose ball in the Leeds half, Martin Odegaard slipped the ball back to the England international who crashed his effort into the roof of the net from the narrowest of angles.

In the second half, Leeds really got themselves on top of the game, and substitute Patrick Bamford controversially had a goal ruled out for a push on Gabriel, before the striker then fluffed his lines from the penalty spot following a handball in the box by William Saliba.

There would be more controversy in stoppage time as Leeds were awarded another penalty following what was adjudged to be a foul from Gabriel on Bamford. The Brazilian defender was shown a straight red card, only for referee Mark Cavanagh to overturn his decision following consultation with the pitchside monitor, with Bamford receiving a booking for simulation instead.

Speaking after the game, Mikel Arteta praised his side’s ‘resilience’ and ‘willingness to win’ in what was a difficult afternoon for his side.

“I think we started really well, we had some terrific moments, we should have put two or three in the net but we didn’t and in the second half it was very different,” he told Match of the Day. “A match more like what we expected, the way they play and the atmosphere you expect in this stadium.

“After that it was survive, we showed a lot of resilience and willingness to win especially going back to Norway on a Thursday night then coming here, I am so proud of the boys that is how you have to win football matches.

“Credit to our goalkeeper, and VAR was in the right place and with the power on it to make the right decision at the end that could have changed the game.”

Asked about Bukayo Saka, who netted for a third consecutive game for his side, he said: “He is full of confidence, top quality, a really difficult execution from that angle, that’s what we want from our players.”

The Spaniard admitted that his side ‘struggled’ in the second half.

“We put ourselves in big trouble, we started to lose one or two balls and they generated that momentum, that chaotic circle that is difficult to get away from, and we struggled.”

Arsenal’s win, coupled with Man City’s defeat at Anfield, moves the Gunners four points clear at the top of the Premier League.