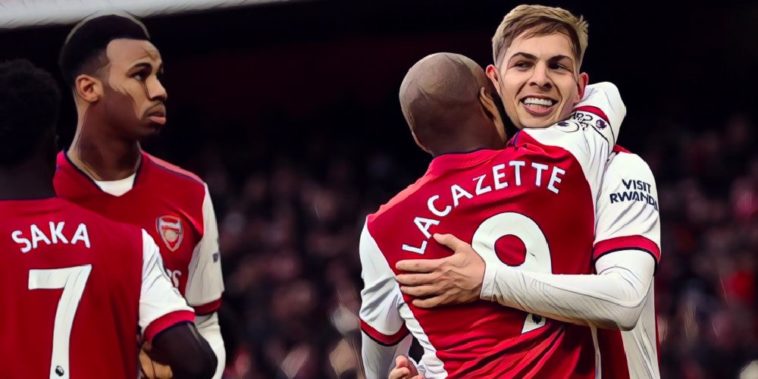 Goals from Emile Smith Rowe and Bukayo Saka helped Arsenal to a 2-1 win over Brentford to bolster their top four hopes.

In a week where virtually every top four chasing side have dropped points around them, Arsenal came into the game just four points behind the Champions League places, the Gunners having three games in hand on fourth-placed Manchester United.

It was all Arsenal in the first half at the Emirates, with Alexandre Lacazette seeing a strike ruled out for offside, while Ben White saw a snapshot saved by Brentford ‘keeper David Raya.

Despite their dominance, however, Arsenal couldn’t find a way through the Bees backline, who, while not producing anything in an attacking sense, produced a resolute defensive display to keep the scores level at the interval.

Having failed with their 16 attempts in the first half, Arsenal would however open the scoring with their first attempt of the second, Emile Smith Rowe driving towards the penalty area before cutting inside onto his right foot, bending the ball beyond Raya and into the far corner.

Brentford showed a bit more intent to get forward after falling behind, but with 11 minutes to play, they surrendered possession near the edge of the Arsenal penalty area to leave themselves open. Thomas Partey drove forward out of midfield, eventually laying the ball off to Bukayo Saka on the left, before the England international fired a fine finish off the inside of the post.

600+ – Arsenal netted their 600th (and 601st) Premier League goals at the Emirates, hitting that milestone in their 297th such game, with only Man Utd at Old Trafford (283) and Man City at the Etihad (290) doing so at a single stadium in fewer games in the competition. Era. pic.twitter.com/4ZLAa6l9ay

The West London side would net a late consolation as Christian Norgaard slammed the ball home from close range, and despite it being initially ruled out for offside, the goal was eventually given following consultation with VAR, although it would be too little too late.

Brentford had beaten Arsenal on the opening day of the season, and Mikel Arteta praised his side’s ‘belief’ and ‘tremendous’ spirit as they moved to within a point of the top four places.

“Different context, different game,” he told Match of the Day.

“But it was really nice see that game, to get ourselves united and understand why we were analysing and didn’t lose our heads.

“I think today we were really, really good. We have a real belief in what we are doing, the players are enjoying the togetherness and the spirit they have is tremendous. They just want to keep pushing themselves.

“We have another game on Thursday, we’ll try to win it and go game by game.”

Asked about academy graduates Smith Rowe and Saka scoring again, he added: “They have to get the headlines because they do what is most difficult and win the match by an individual action. They deserve credit for that, but I thought the rest of the team were very good too.

“We do a lot of work with them individually, mentally with the psychologists, to fill their belief. They see how they are with the supporters, that energy and that’s probably their biggest strength.

“[Smith Rowe] He’s been injured. He’s worked really hard and when he plays like he did today, he’s really good.”