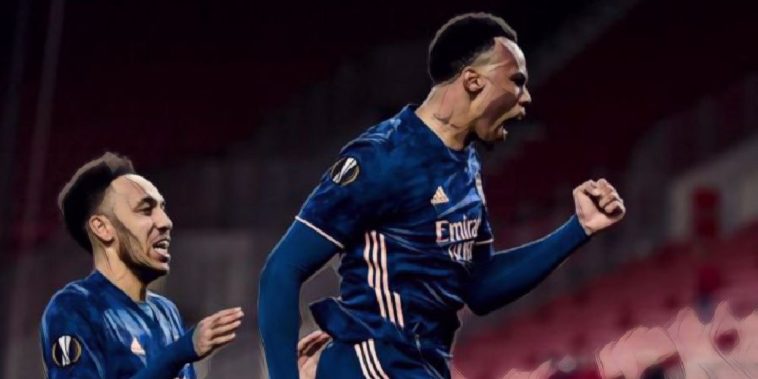 Arsenal took a significant step towards the Europa League quarter-finals, overcoming a second-half setback to beat Olympiakos 3-1 in Pireaus.

Arsenal got off to a positive start and were dominant from the off, Martin Odegaard dragging a shot wide of the post while Pierre-Emerick Aubameyang saw an effort tipped onto the bar by Jose Sa following a deflection off former Gunners defender, Sokratis, all inside the opening eight minutes.

The Gunners would take the lead just after the half-hour mark, Real Madrid loanee Odegaard finding himself in space, setting himself onto his favoured left foot, before unleashing a venomous strike into the back of the net from 25 yards, the ball moving in the air slightly before arrowing past Sa, though the Portuguese ‘keeper should maybe have done better despite the thunderous pace on the ball.

Arsenal looked comfortable and in control, though they would be the masters of their own downfall in the 59th minute, Bernd Leno’s pass to substitute Dani Ceballos putting the Spaniard in trouble, with Youssef El Arabi nipping in to steal the ball before firing past the 29-year-old ‘keeper who couldn’t get back into his goal in time to keep out the Moroccan’s effort.

The goal gave the Greek side renewed vigour, and they could have taken the lead in the 66th minute as El Arabi saw a strike blocked by an Arsenal defender after some neat football down the right.

The visitors, however, took the lead once more with 11 minutes remaining, summer signing Gabriel Magalhaes showing great desire to meet a Willian cross following a short corner, the Brazilian heading back across goal and past Sa.

Six minutes later, Arteta’s side would then put one foot in the last eight as substitute Mohamed Elneny doubled the Premier League outfit’s advantage just three minutes after his introduction, the Egyptian firing home from all of 30 yards.

Speaking afterwards, Arteta was pleased with the vast majority of his side’s play, but insisted they cannot continue to keep making mistakes like the one that presented the hosts with their equaliser.

Two late goals for the Gunners as they make hard work of the win in Greece. pic.twitter.com/PissJQ4TK2

“We gave them a goal trying to play out from the back but then we reacted well to score two more goals. Overall a really positive result but we have to stop making the errors that are costing goals because we cannot sustain that.

“It isn’t about concentration it is about when you play the ball. It is not about stopping the way we play because this is us.

“We were really solid, really dominant. We showed a lot of personality to come here and dominate like we did. The next thing is to do that for 90 minutes and give nothing to the opponent.

“This is half time and anything can happen. Full focus and we start 0-0 again in the second leg and try to win the game.”

Next up for Arsenal is a huge North London derby against Tottenham at the Emirates before next week’s second leg.