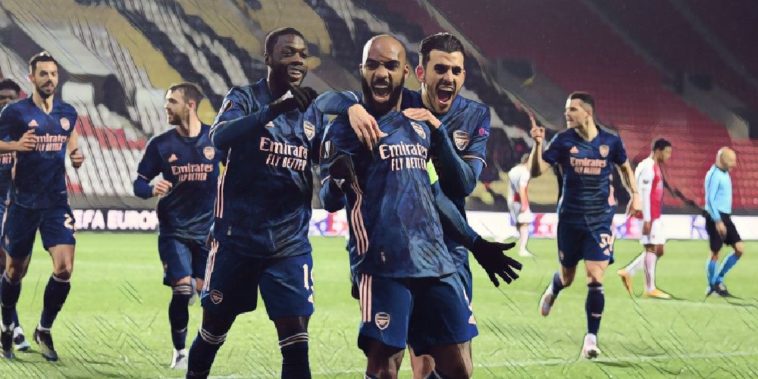 Arsenal’s hopes of playing Champions League football next season were given a boost as they cruised into the Europa League semi-final’s following a 5-1 aggregate victory over Slavia Prague.

The Spaniard made just one change from the side that had been so impressive at the weekend against Sheffield United, the fit again Emile Smith Rowe coming in for one of Sunday’s goalscorers, Gabriel Martinelli, while the Gunners were left without both Pierre-Emerick Aubameyang and Martin Odegaard, the former revealing he contracted malaria while on international duty with Gabon.

Having cruised to victory at Bramall Lane, Arsenal picked up where they left off in Prague, Smith Rowe seeing an early close-range effort denied by VAR, before Arteta’s men netted three times in just six minutes to put the tie beyond their opponents.

The first of the night came courtesy of wideman, Nicolas Pepe, the Ivorian netting his fifth goal in the competition this season with a brilliant finish from an acute angle following some good work from Smith Rowe around the edge of the box.

Just moments later, Arsenal were then awarded a penalty after Bukayo Saka was brought down in the box, the experienced Alexandre Lacazette stepping up to fire home, before Saka made it three inside 24 minutes, the England international cutting in off the right before slotting home superbly at the near post.

With the damage done in that blistering first period, the Premier League side coasted through the remainder of the game, Lacazette adding a fourth in the 77th minute to put the gloss on the result, the Frenchman making it back-to-back braces with a well-taken strike on his weaker foot.

Unai Emery has reached the Europa League semi-finals more times (6) than any other manager in the competition's history:

He's only been knocked out once. #UEL pic.twitter.com/0IGuC6J1Ez

“We started really well in a convincing way, aggressive in our high press,” he told BT Sport. “We looked a threat all the time. I really like the reaction of the team to the goal being disallowed.

“We scored some great goals, The clean sheet is important as well, the second one in two games.

“It helped the way we played against Sheffield United. The players were in high confidence, when performances are so high the collective improves. The boys were really at it from the start.

“It is a really important win in a crucial moment. We won in a convincing way, so credit to the players.

“There is still a lot to do and things we can improve on, but we have a real desire to improve and be better every day. It will be really tough and Unai Emery is probably the most successful manager in this competition.”

Arsenal host relegation-threatened Fulham at the Emirates on Sunday afternoon.

Fantasy Premier League: Four of the best captains for gameweek 32