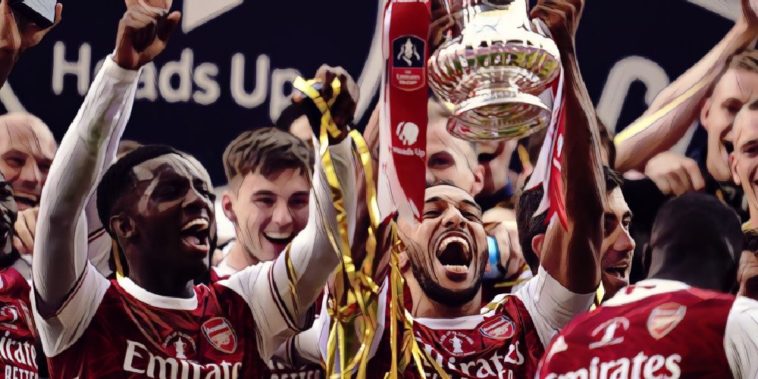 A Pierre-Emerick Aubameyang inspired Arsenal secured a record 14th FA Cup victory with a 2-1 victory over Chelsea at Wembley Stadium.

Having finished the season strongly by securing their place in in the Champions League next season, Chelsea took the lead early in the cup final, in-form Christian Pulisic slotting home after just five minutes after a well-worked move down the left.

However, Arsenal talisman Pierre-Emerick Aubameyang got the Gunners back on level terms from the penalty spot just before the half-hour mark, the Gabon international having been brought down after racing past Cesar Azpilicueta who had misjudged a long ball over the top, before the Gunners skipper sent Willy Caballero the wrong way.

The north Londoners would seal a record 14th FA Cup success with a lovely finish from their captain, Aubameyang shifting the ball onto his left inside the Chelsea box before dinking it over veteran Argentine ‘keeper Caballero.

Chelsea had to play the last 17 minutes of the game, plus a lengthy period of stoppage, with just 10 men, Mateo Kovacic harshly shown a second yellow card for a foul on Granit Xhaka. Lampard’s side were unable to make inroads in the final minutes, the Blues finishing the game with just nine players following an injury to the departing Pedro.

The result also secures Arsenal’s place in next season’s Europa League having only managed to finish eighth in the Premier League, and Mikel Arteta was delighted with his side’s ‘massive effort’ and paid tribute to his teams fighting spirit.

“It was a difficult start when we conceded so early. If I know something about these players, is that we weren’t going to give up,” Arteta told the BBC.

“We played probably the best 30 minutes after since I arrived. I am so proud to represent these players and this club.

“It is a double reward for us. It is really important for this club in every way to be in Europe. We all did it so I am so happy.

“The players were completely knackered and they made a massive effort through the coronavirus to keep fit so I am so happy for them.”