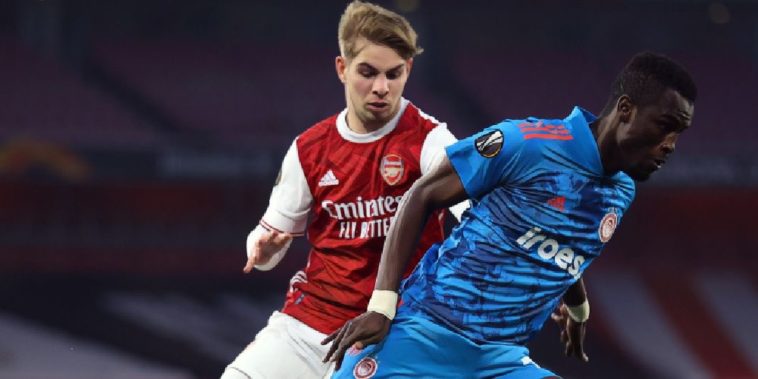 Mikel Arteta has admitted that his Arsenal side weren’t at their best, as they edged into the Europa League quarter-finals despite losing to Olympiakos 1-0 on the night.

Despite the Gunners being in a relatively comfortable position following their 3-1 first-leg victory last week, Mikel Arteta still opted for a strong starting XI, including recalling Pierre-Emerick Aubameyang to the side after he missed the North London Derby due to a disciplinary issue.

The 31-year-old looked set to redeem himself for his weekend misdemeanour on 24 minutes, yet somehow lashed his poked effort over the bar, with Olympiakos forward Youssef El-Arabi having wasted a one-on-one chance just minutes earlier.

The Moroccan international made up for that wastefulness just five minutes after the interval, however, the forward cutting in from the left and curling his effort past Bernd Leno via a deflection from Arsenal defender Gabriel to give the visitors the faintest of chances in the tie.

The Gunners boss reacted by bringing on the big guns in the shape of Thomas Partey and Martin Odegaard, while winger Nicolas Pepe saw his seemingly goal-bound effort strike the head of teammate Emile Smith Rowe and ricochet wide.

Any hope of an unlikely comeback by the Greek side was however all but ended on 82 minutes, defender Ousseynou Ba sent off after picking up two yellow cards in a matter of seconds, with Arteta’s men hanging on to progress to the quarter-finals despite losing on the night.

The Spaniard admitted that after a disappointing performance, he was just ‘happy to be through’ to the next round of the competition.

4/5 – Arsenal have made it to the quarter-finals for the fourth time in their last five Europa League/UEFA Cup campaigns (knocked out at Last 32 stage last season), after failing to reach that stage in each of their first five attempts. Relief. #UEL

“We were unstable with the ball and we gave it away. It’s impossible when you give the ball away to have any structure. We created enough chances to win but were nowhere near the levels in which we can perform.

“We can’t use any excuses. We had fresh players in the side. We started the game really well but then we had lack of stability. We need to keep the ball and play some passes together and not just keep giving the ball away in transitions.

“When we conceded, we did get better and got more control but with their goal, we gave them some belief, which you cannot give to the opponent. We’ll get better. When it comes to decision-making and execution, it’s a little bit more difficult.

“We need another win in the Premier League and it’s a big chance after the international break to get a run together.”

Arsenal are next in action against West Ham United on Sunday, their last game prior to next week’s international break.