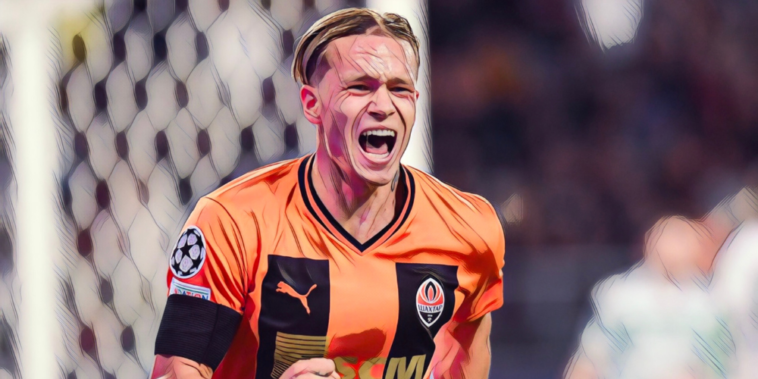 Arsenal have submitted an opening offer for Mykhaylo Mudryk, but the bid falls short of the Shakhtar Donetsk’s valuation of the winger.

The Gunners opening bid is understood to be an initial €40m with a further €20m in potential add-ons, as Mikel Arteta looks to improve the goal threat of his side across the second half of the campaign.

The 21-year-old has been linked with top clubs across Europe following an impressive breakthrough in Ukraine, where he has ten goals and eight assists in 18 appearances across all competitions this season.

Mudryk impressed during the Champions League’s group stage for Shakhtar and Fabrizio Romano is reporting that the Ukrainian side want ‘way more’ than Arsenal’s opening bid for their prized asset.

Shakhtar want ‘way more’ than this to sell Mudryk.

Talks will take place with player’s agent to discuss about the deal.

Personal terms are not expected to be an issue for Mudryk, who is keen on a move to the Premier League leaders.

He discussed the prospect of leaving for a major European league earlier this season and criticised Shakhtar’s unrealistic valuation, with the club’s director, Darijo Srna, having hinted it would take a bid in excess of €100m.

“When I found out about my price, I wasn’t just surprised – I was shocked,” Mudryk told Sport Arena.

“I have a long-term contract with Shakhtar [set to expire in December 2026], I give all my strength and energy so that Shakhtar achieves maximum results… but every football player has a dream to play in a top club and in a top championship – I am no exception.

“But I am 100 per cent sure that they are unlikely to buy a player from the championship of Ukraine for 100 million… I will not hide that I was very upset. The amount of 100 million puts a barrier for my transition to the top championship, which I so dreamed of. I can’t say that my dream was killed, but wounded – that’s for sure.”