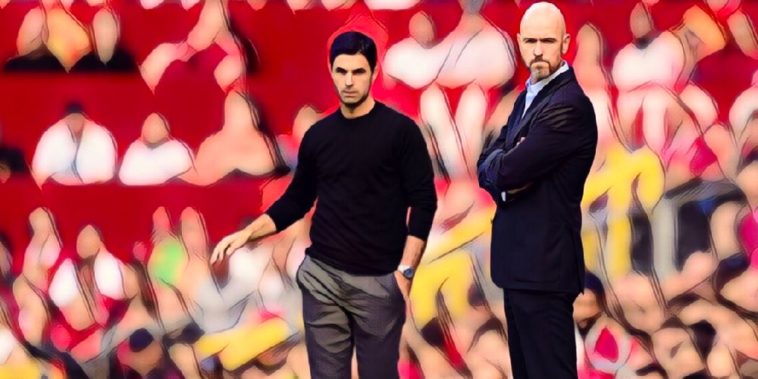 Mikel Arteta has said Arsenal need to learn from their early season defeat to Manchester United, while saying he has been impressed with Erik ten Hag’s tenure at the club so far.

Arsenal host Manchester United on Sunday afternoon in one of the most high-profile meetings between the sides since they were the two most dominant sides in English football in the ’90s and early 2000s.

Both sides have since had spells in the doldrums, but both seemed to have turned a corner this season, with Arsenal currently five points clear at the top of the Premier League, while United sit in third and are unbeaten in 10.

United won the first meeting between the sides this season back in September, a result that remains the Gunners’ only league defeat of the season, and speaking ahead of this latest clash, Mikel Arteta said there were ‘important lessons’ for his side to learn from that fixture.

“We have to learn,” Arteta said at his pre-match press conference. “There were some important lessons about that game and the reason why we lost it.

“In many moments we were in total control of the day. But we know that’s one of the qualities of Man United – when you are in control of the match, the game gets away from you because they have so much individual talent, good organisation and many ways to create problems. We’ll have to be at our best to win on Sunday.

United had looked to be winning a 10th successive game in midweek, only for Michael Olise to step up and crash a fantastic equaliser in-off-the-bar to earn Crystal Palace a point in the 91st minute.

“I don’t know [if that goal will take the wind out of United’s sails],” said Arteta. “What happens with the other teams and results: there’s still half of the league to go. There are a lot of twists and turns to go. We have to be consistent in what we do, play the best possible way and control that. The rest will take control of itself.”

Arsenal and United’s rivalry was one of the defining features of the Premier League’s early years, with the pair sharing 11 of the 12 league titles on offer between the 1992/93 to 2003/04 seasons.

“I think the history and the clashes and the way those two clubs have competed, it tells you everything that you need to know before the match,” Arteta said of the rivalry.

“It’s a huge game in the league, in the country, around the world and we have to prepare for that. The table says what it says this season right now but our main focus is on being prepared for a big match.”

Manchester United were nothing short of shambolic last season as Ole Gunnar Solskjaer’s tenure unraveled and interim boss Ralf Rangnick was unable to solve the problem.

Erik ten Hag has, however, steered the club through some choppy waters to leave the club in a good position for at least a top-four finish, and Arteta was asked about the work that has been done by his opposite number.

“Really impressive,” he said. “I think he’s turned things around pretty quickly. He has implemented a very clear way of playing. I think the players seem like they’ve bought into it, they have really good energy around the place. And a lot of things have changed in a very short period of time so credit to him and the coaching staff for what they’ve done.”