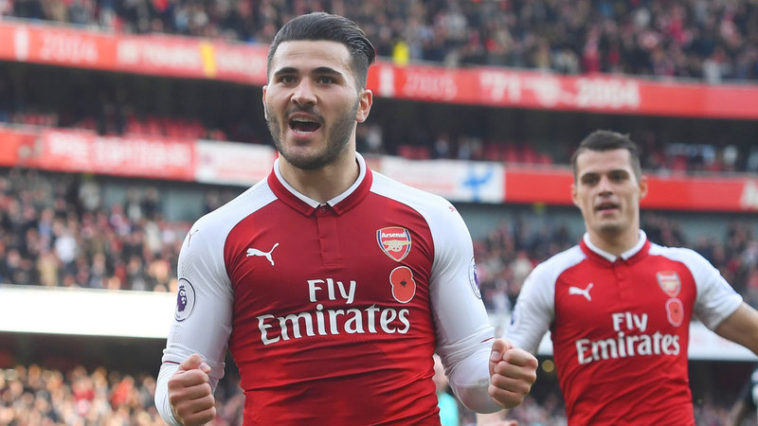 Arsenal came from behind to win 2-1 against Swansea at the Emirates Stadium yesterday to bring themselves fifth in the table, level on points with fourth placed Chelsea. Here are five things that we learned from the game.

Over the past few years, one of Arsenal’s biggest problems has been keeping the possession yet failing to create goals out of those chances created. The Gunners kept over 75% possession in the first half, but were still trailing halfway through the game. It took Arsenal a long time to take their chances and finally score a goal when Sead Kolasinac put them on level after 50 minutes.

Mesut Özil has created the most chances in the Premier League over the last four seasons but only a miniscule number of these chances have been converted to goals, which has been Arsenal’s major problem.

Kolasinac could be the signing of the summer

Arsenal signed Sead Kolasinac on a free transfer this summer. The Bosnian has been a great addition to the Gunners and has impressed since day one. And yesterday against Swansea was another one of his impressive performances. Kolasinac scored one and assisted the other as he was involved in both the goals and was clearly Arsenal’s best player on the field.

With the likes of Romelu Lukaku and Alvaro Morata, the new signings doing so well for their clubs, one wouldn’t mind mentioning Sead Kolasinac on the same sheet of paper as those two.

Things not working out for Swansea

Swansea are 17th in the table, and an Everton win on Sunday could see them drop down into the relegation zone. Swansea will have to work out something really fast if they want to stay in the Premier League. At this point, they certainly look like a team who have failed to replace Fernando Llorente and Gylfi Sigurdsson, two of their best players last season.

Only five points separate nine teams in the bottom half of the table, which tells you it really is going to be a long season for the teams fighting relegation this season.

No 90 minutes for Lacazette

Arsenal’s star signing Alexandre Lacazette looked unhappy as he was replaced in the 80th minute by fellow Frenchman Olivier Giroud who won the Puskas Award earlier this week. Lacazette has looked really good at times this season but is still waiting to get a full 90 minutes under his belt. And it’s not just him, all Arsenal fans are really waiting to see him get the game time that any first choice forward would want at any big club.

Arsene Wenger has a big problem here as he needs Olivier Giroud to get some playing time as well. Giroud will want to be on the plane to Russia next year, and for that he will have to start playing regularly and start scoring goals.

Arsenal have not lost a game at the Emirates Stadium since February, when they lost 1-5 to Bayern Munich in the Champions League. The last Premier League game that Arsenal lost at The Emirates Stadium was against Watford, back in January last season.

Arsenal’s away record might not be that good, but Arsene Wenger’s side really does give their fans something to cheer about at home games. Maintaining this home record will really influence Arsenal’s Premier League campaign, so they need to focus on it. Especially in their next Premier League  home game, where they face rivals Tottenham Hotspur.