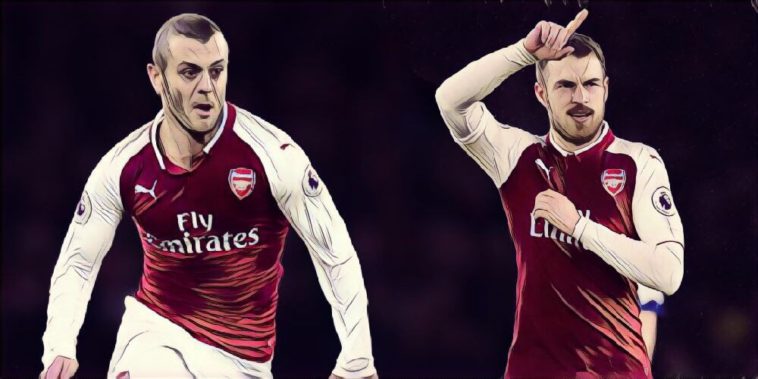 Jack is back! Or at least it seems so as against Tottenham Jack Wilshere made his 25th appearance of the season in all competitions. This is the most appearances that the 26-year-old has made for Arsenal since the 2013/2014 season.

However, it’s not only about the amount of games he’s played, Wilshere has also been one of Arsenal’s most consistent performers in their inconsistent season. He started to put in the sort of performances that were expected from him when he broke into the Arsenal team when he was just 18 years old.

Wilshere is not Arsenal’s only talented British midfielder that has problems staying fit. Aaron Ramsey has also had his issues with injuries most notably the horrendous leg break that he suffered against Stoke in February 2010, although he hasn’t missed anywhere near the amount of game time that Jack has.

He has however had great runs of form like the one Wilshere is going through at the moment. Especially the 2013/2014 where the Welshman was Arsenal’s best player, scoring 10 Premier League goals and also getting the winning goal in the F.A Cup final.

Both Wilshere and Ramsey are at similar stages of their careers where they need to be playing regular first team football and when healthy, they’re both too good to just be squad players. It benefits Arsenal to keep both of them if possible as competition for places is a good thing. However, both of them would probably prefer not to be competing with a player of similar age and ability as they’re starting to get into their late 20s. It is especially important for Wilshere to get plenty of game time with Gareth Southgate having made it clear he has to be playing regular football to be considered for the England squad.

This does bring up the question, can’t they play together? It’s not like they have too similar playing styles. As Ramsey main traits are his ability to score goals from midfield and his tireless energy whereas, Wilshere likes to get on the ball and control the game for his team. Yet Arsene Wenger still doesn’t seem confident in playing the pair together. This season Wenger has usually employed a two-man centre midfield partnership with Wilshere and Xhaka being his usual preferred pairing. Wenger seems to not trust the defensive capabilities of either Ramsey or Wilshere, so he puts Xhaka in there to provide cover for the defence – although it’s fair to say that Xhaka hasn’t been too successful at that this season.

Arsenal could however change to a three-man midfield like the one they used in the recent defeat against Tottenham, although Ramsey missed the game through injury. This would allow Ramsey and Wilshere to play together whilst also having Xhaka in to provide defensive stability. The problem with this formation comes from higher up the pitch as this would mean that Ozil and new signing Mikhitaryan would be pushed out onto the wings. Arsenal have seen in previous seasons that Ozil hasn’t got the energy or pace to do the constant tracking back that is necessary for a winger in that formation.

Also playing two of your most creative players in unnatural positions isn’t exactly a recipe for success. They could use a diamond formation instead to avoid that problem, but then the team might seriously lack width. So, if Arsenal change their system, both Wilshere and Ramsey may be able to fit into the same team however, it remains to be seen if the rest of the squad would suit that same system.

Both players seem to have a great love for Arsenal. Wilshere has grown up as an Arsenal fan while Ramsey has been at the club for a long time now. Also, Arsenal and Arsene Wenger have stuck by both players throughout their long injury layoffs. However, they both might have to seriously consider their future at the club. It would be preferable for Arsenal to keep their two talented centre midfielders and it would be a tough choice for the club to choose a first choice between the two. The pair have missed enough game time already in their careers. So, it may be better for both of them if one player leaves so they may finally both get the consistent first team football that has eluded them for the majority of their careers.

Arsenal fans, can Wilshere and Ramsey play together? How would you fit them in the team? Leave us a comment below!