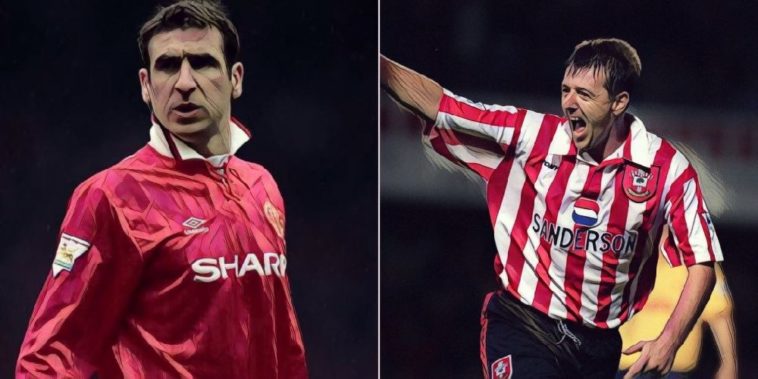 Regarded by many as the greatest domestic league in world football, the Premier League is amongst the most entertaining sporting spectacles on the planet and has played host to some of football’s finest in modern times.

The division’s greatest goalscorers are often showered with acclaim, although there has been a greater focus on the leading assists providers of late as football fans have ever-increasing access to stats.

Players with an ability to score or assist with regularity are worth their weight in gold to Premier League sides, but even rarer still are the players capable of both.

In fact, just four players in the division’s entire history have ever managed to register 15 goals and assists in a single season, and we’ve decided to recognise the achievements of the exclusive quartet.

The inaugural season of the Premier League and a transfer that would change the history of English football, Cantona began the campaign with reigning champions Leeds before making the move to Old Trafford to join Sir Alex Ferguson’s Manchester United.

The Frenchman scored six times for the Yorkshire side before his switch across the Pennines in November, before helping to inspire the Red Devils to a first league title in more than two decades.

United were as low as eighth when the forward arrived following an indifferent beginning to the campaign, but the presence of the charismatic Cantona in attack led to an upturn in fortunes.

Cantona scored nine league goals over the second half of the season for United to finish the season with 15 Premier League goals, whilst his ability to create chances for teammates saw him register 16 assists.

No player in the Premier League provided more assists than the mid-season signing, Cantona finishing the year by placing third in the vote for the Ballon d’Or.

The early seasons of the Premier League were perhaps peak Le Tissier, a player capable of special moments and one of the most celebrated showmen in the division’s history.

Le Tissier’s one-club career see him rightly recognised as the finest player in Southampton‘s history, possessing a highlight reel few can match and almost single-handedly saving the club from relegation season upon season.

The Saints’ reliance on their maverick talent was evidenced once more during a brilliant 1994/95 season for Le Tissier, the Guernsey born star scoring 19 goals and providing a further 16 assists – the latter the highest tally in the Premier League that year.

Alan Ball’s side were in the relegation places going into the final ten games of the season, only for an upturn in form – inspired by Le Tissier – seeing the club eventually finish in the top half.

Le Tissier was directly involved in more than half of the club’s league goals throughout the entire campaign, becoming the first player to be named as Southampton’s Player of the Season on three occasions and being included in the PFA Team of the Year.

Thierry Henry reigned as the Premier League’s finest player for much of his eight-year career at Arsenal, with the early naughties arguably the forward’s devastating peak in north London.

Having helped the Gunners to a domestic double the season prior, Henry scored 24 goals and provided 20 assists during the 2002/03 season in a stunning individual campaign.

His 20 assists is a landmark that no player has since reached and earned the Frenchman the PFA Player of the Year and FWA Footballer of the Year awards, one of two successive seasons he won the prestigious double of individual honours.

Henry became the first – and so far only – player to register 20 goals and 20 assists in a single Premier League season, though his achievements that season were still not enough to see Arsenal retain the title as the north London side finished as runners-up to Manchester United.

The most recent entry on our list is former Chelsea star Eden Hazard, who enjoyed the most productive campaign of his Stamford Bridge career last season before departing for Real Madrid.

The Belgian international scored 16 goals and registered a league-high 15 assists, winning the Premier League’s playmaker award for the 2018/19 season.

Hazard’s 15 assists saw him finish ahead of Bournemouth’s Ryan Fraser and Liverpool’s Trent Alexander-Arnold, whilst his performances also saw the winger recognised as the PFA Fans’ Player of the Year.

Hazard’s goal contributions helped secure a top four finish and Champions League qualification for Chelsea, whilst his 16 goals made it the joint-best goalscoring season of his Premier League career, matching his tally from the Blues’ title-winning season of 2016/17.