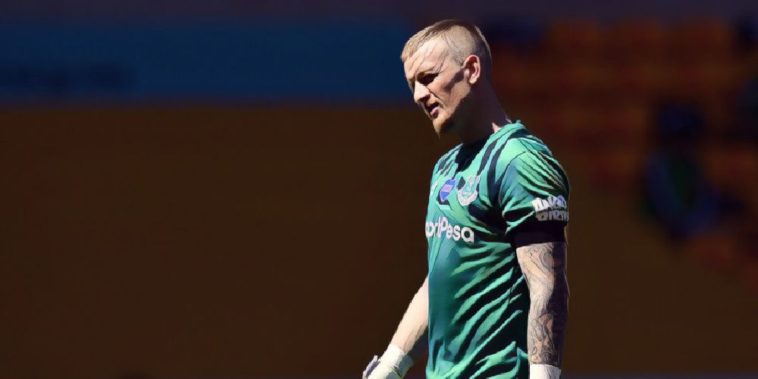 Carlo Ancelotti has warned Jordan Pickford that his form ‘has to improve’ for Everton following a series of recent blunders from the goalkeeper.

Pickford has struggled to replicate his best form in recent months and question marks have been raised over his status as England’s number one, a series of high-profile errors and increased competition from the likes of Nick Pope and Dean Henderson leaving the 26-year-old’s position in the national setup uncertain.

Ancelotti has taken note of Pickford’s inconsistent displays in recent weeks and admits the goalkeeper’s form is a cause for concern, with the former Sunderland star fortunate to go unpunished after spilling a Daniel Podence effort in the disastrous 3-0 defeat to Wolves last weekend.

Ahead of tonight’s clash with Aston Villa, the Italian has now issued a warning to Pickford over his form and insists he must improve, though backed the goalkeeper to overcome his slump and rediscover his finest form.

“I don’t know if he needs competition,” the Everton boss said at his pre-match press conference. “I know that he is not doing well. I spoke with him. He’s not doing well. He has to be focused on himself, on his performance – day by day (he has) to try to be better.

“I’m not so worried because he has quality. He has character but I have to say to him – and I have said to him – that he has to improve. I don’t know if he does or doesn’t feel pressure; pressure is a part of your job. You have to feel pressure but pressure can be a good gasoline for your job.

“I – and everyone else at the club – has total confidence in his quality. It is true he can do better and he knows this because he is critical of himself. I hope there is improvement in the next games. I spoke to him (on Tuesday) about this.

“There is absolutely no problem (between us). For the quality that he has – and he agreed – he has to be better. My style is to have a direct relationship and direct communication with the players. If something is wrong I have to say clearly what is wrong.”

Ancelotti was critical of his side’s attitude and performance during the harrowing defeat at Molineux on Sunday, but says the Toffees have responded in training this week ahead of the clash with struggling Villa at Goodison Park this evening.

“In the last few days we have focused on the attitude,” he added. “In training I have seen a different attitude and I hope that (against Villa) it will be the same in the game.”