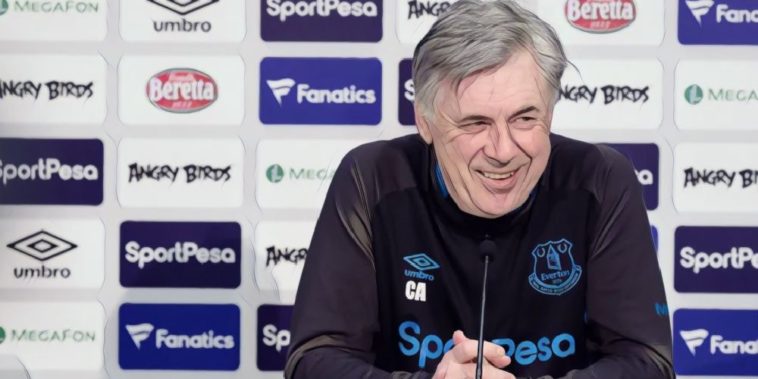 Carlo Ancelotti has ruled out the prospect of Everton signing a striker this summer or a replacement for the injury-ravaged midfielder, Jean-Philippe Gbamin.

Gbamin has endured a nightmare period since signing for Everton in a £25m deal from Mainz in 2019, making just three appearances for the Toffees in all competitions following a succession of serious injuries.

The midfielder has now been ruled out for the remainder of the season after sustaining a fresh fitness issue last week, a knee injury set to sideline the Ivorian for around eight weeks in the latest blow to his hopes of making an impression on Merseyside.

Ahead of this evening’s clash with Tottenham, Ancelotti admits it is a ‘difficult’ moment for 25-year-old who has seen the past two seasons wrecked by injury, but has backed Gbamin to come back and believes the star still has a role to play in his squad.

“I don’t think we are going to replace Gbamin because we are sure he has the quality and the potential that he can play,” said Ancelotti at his pre-match press conference. “Before I came it was a great investment from the club and we still have trust in him. Honestly, he suffered a lot of injuries but we have confidence that when he is back next season he can be of help to us.

“Before this time of injury, he had played at least 55-60 games without a problem. Unfortunately, it can happen. Personally, I was out injured for two years when I was 20 and I had a fantastic career afterwards. It is a difficult moment for him but we are confident he will be back soon and in fantastic condition.”

Ancelotti says his focus has not yet turned towards the summer transfer window given Everton’s fight to secure European football over the run-in, but ruled out the prospect of a new centre-forward arriving at Goodison Park.

Dominic Calvert-Lewin is established as the club’s leading number nine with the likes of Richarlison and Josh King providing supporting roles, whilst Ancelotti said Moise Kean could yet play a part following a successful loan spell at Paris Saint-Germain.

“Honestly, we didn’t have a look at the market for next season because we are in the fight for European positions,” he said. “But I can tell you that it [a striker] will not be the position we are looking for. In front we are really well covered because we have Dominic Calvert-Lewin, we have Richarlison, we have in this moment Joshua King and we have Moise Kean coming back”

Kean endured a difficult debut season at Everton following a £27.5m move from Juventus, but has thrived since signing for PSG with 16 goals in all competitions for the Champions League semi-finalists.

The 21-year-old has been linked with a permanent move to the Parisians and with former club Juventus, though Ancelotti insists he doesn’t have to ‘convince’ the player to stay at Everton and says Kean will remain with the club and be an ‘important player’ unless there is a suitable offer made.

“I don’t have to convince him to stay at Everton. This is what the [loan] papers say. He is on loan and he has to come back. If Paris Saint-Germain wants him they have to open discussions about him. We are open [to negotiations] but if nothing happens then he will be an Everton player next season and an important player.”