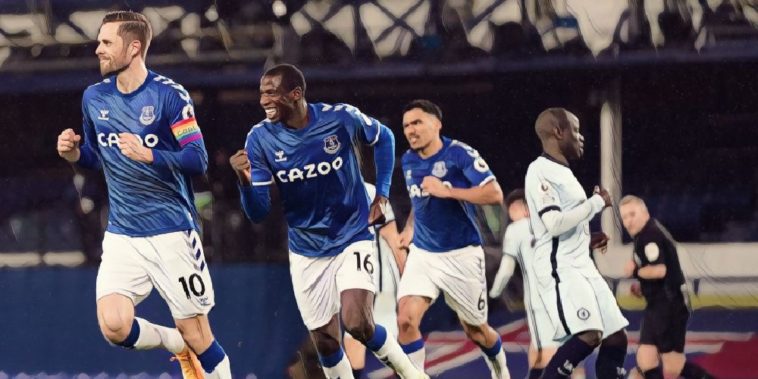 Everton got back to winning ways as they battled to a 1-0 win over Chelsea as the Merseyside outfit were cheered on by their returning supporters.

After their impressive start to the season, the Toffees have dropped off in recent weeks and came into the game with just one win in their last seven outings.

However, Carlo Ancelotti’s side look energised by the return of supporters to Goodison Park, who, despite only being 2,000 strong in number, made their voices heard throughout.

The hosts took the lead on 22 minutes, a long punt upfield from Jordan Pickford finding Dominic Calvert-Lewin, the England international striker getting to the ball first before being wiped out by Edouard Mendy. Gylfi Sigurdsson stepped up and sent the Senegalese the wrong way as he confidently rolled the ball home from the resulting spot-kick.

Chelsea had their chances throughout their game, twice hitting the woodwork, but Frank Lampard’s side were constantly met by a dogged and determined Everton backline. Michael Keane was particularly impressive at the back, making nine clearances as Chelsea tried to probe from all angles, but ultimately failed to register a single shot on target in the second half.

Four teams have stopped Chelsea from scoring in the Premier League this season:

Carlo Ancelotti's side join an elite group of clubs. pic.twitter.com/9wME5uAb6F

Speaking afterwards, former Chelsea boss Ancelotti was delighted with the impact of their returning supporters, while praising his teams ‘sacrifice’ after admitting his side are ‘not at the same level’ to their opponents.

“I am really pleased in front of our supporters,” he told BT Sport. “We are really happy for them, they have seen a good match from Everton.

“We played well with fantastic spirit. The fans supported us and it is really important to have their support, it is a totally different environment.

“Defensively we did really well. The team sacrificed, that was the target because against the top teams like Chelsea you have to sacrifice. We were dangerous on the counter and we didn’t concede many opportunities. We deserved to win.

“It is our target to compete, it is really difficult to compete with Chelsea. We beat them but we are not at the same level.”

The result moves Everton back up to seventh ahead of their midweek trip to face Leicester before hosting Arsenal next weekend.