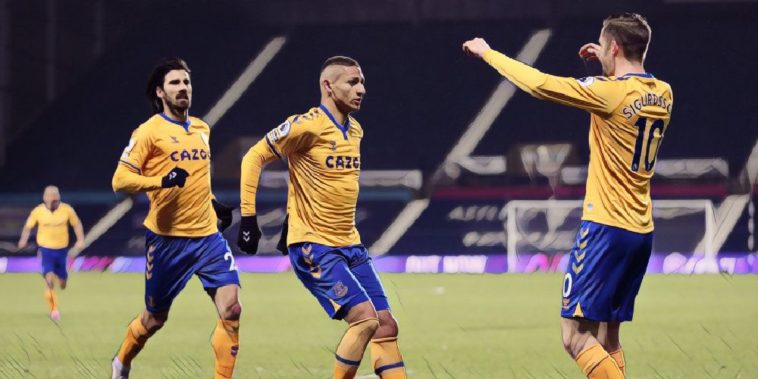 Everton moved into the top four with a hard-fought, 1-0 win over struggling West Brom and former manager, Sam Allardyce.

West Brom were the better side in the early stages and they could have gone ahead through January signing Mbaye Diagne in just the second minute, though the Senegalese saw his header from a Connor Gallagher cross well saved by Jordan Pickford.

As the game went on, Everton started to get more of a foothold, with Darnell Furlong putting in a good block to deny a 38th-minute Richarlison effort, while four minutes later, Dominic Calvert-Lewin saw a shot saved by Sam Johnstone, thought the England striker probably should have done better.

Carlo Ancelotti called upon Gylfi Sigurdsson from the bench in the 64th minute, and less than a minute after his introduction, the Iceland international delivered a peach of a ball from the left after his initial corner was cleared, his cross nodded home from close range by the in-form Richarlison.

It certainly wasn’t the Toffees finest performance of the season, as West Brom continued to probe throughout the game.

The Baggies thought they’d bagged a vital 93rd minute equaliser, Diagne finding time and space inside the Everton box, taking a touch with his chest before firing past Pickford, only to be agonisingly denied by the linesman’s flag.

Speaking afterwards, Carlo Ancelotti was pleased with the defensive solidity of his side against Big Sam’s spirited side.

“It was really hard, really difficult, but the Premier League is like this,” he told BBC Sport. “West Brom has a lot of strength, fight, long balls and a lot of spirit. We needed to be ready and we were ready.

“Defensively we are strong and we have quality at set-pieces and on the counter-attack.”

The result moves Everton into the top four, and the experienced Italian is hoping they can remain there ahead of the final 12 games of the season.

“We’re doing well and now we’re in the fight at the top of the table. The season is still long but we are there and pleased to be there.

“I would like to say the season has been a fantastic one at the end of the season.”

Next up for Ancelotti’s side is a trip to face his former side, Chelsea, in what could be a crucial game in a hotly contested race for a top-four finish.