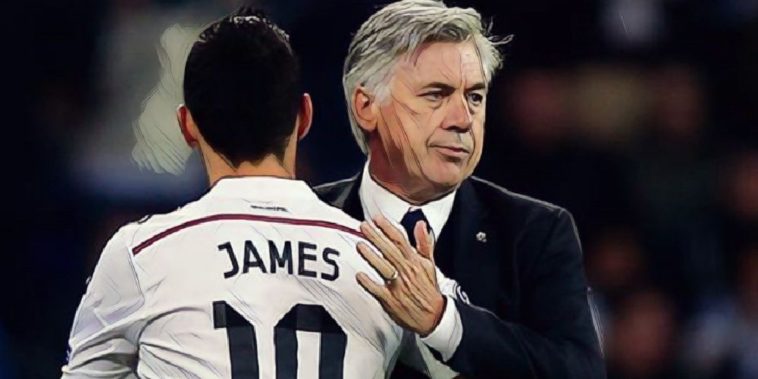 Carlo Ancelotti says he has been given ‘assurances’ over Everton’s spending power this summer, but remained coy on speculation linking the club with a move for James Rodriguez.

Ancelotti has made a positive start to life on Merseyside since being named as Marco Silva’s successor in December, with Everton retaining faint hopes of securing a place in Europe next season ahead of the Premier League’s run-in.

The Italian will, however, be keen to strengthen his side with new additions this summer as the Toffees look to close the gap to the division’s leading sides, and Ancelotti has confirmed that funds will be available to spend in the transfer window.

“I have assurances from the board that we are going to improve the squad,” he said.

Ancelotti’s claims come despite Everton posting a record loss of £111.9m in their accounts for 2018/19, whilst the Blues’ boss, his coaching staff and players have all agreed to wage deferrals to help with the financial impact of the coronavirus pandemic.

Asked whether the club must sell first in order to buy, however, Ancelotti replied: “No.”

One name continually linked with a switch to Goodison Park has been Real Madrid’s James Rodriguez, the Colombian international expected to leave the Spanish giants this summer after falling out-of-favour.

Stellar names including the likes of Thiago Silva, Edinson Cavani, Adrien Rabiot and Gabriel Magalhães have also been mooted as potential targets for the Everton boss, whose status as a three-time Champions League winner is likely to increase the pulling power of the Merseyside club.

Ancelotti insists the club will be in the market for ‘good players’ this summer, but refused to be drawn on specific targets despite admitting Rodriguez – who he signed during his time as Real Madrid manager – is a player he greatly admires.

“We need good players and the players that we are going to sign will be good players,” Ancelotti said. “It doesn’t matter whether they are young or old; with experience or without experience. It is important to have good players. The names that have been mentioned are the same names that were mentioned one year ago when I was in Napoli. They follow me!

Ancelotti added that he is keen to improve the character and personality of his side ahead of the new campaign, outlining his ambitions to have Everton competing alongside the division’s top six.

“It is important to improve the character and personality of the team,” he said. “I can improve their knowledge on the training ground day by day but the mentality of the squad can also improve to compete better with the top-six teams in the Premier League.”

See also – Tweets of the Week: Liverpool bantered, Premier League stepdads and who is Luke Garbutt?