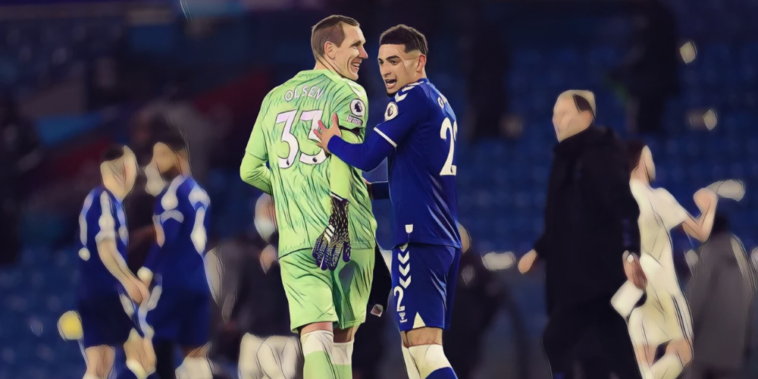 Carlo Ancelotti says he was delighted with his side’s all-round defensive display as Everton bounced back to win at Leeds on Wednesday night.

Goals from Gylfi Sigurdsson and Dominic Calvert-Lewin ensured Everton returned to winning ways with a 2-1 win at Elland Road, responding to last weekend’s disappointing home defeat to Newcastle with a hard-fought three points in an entertaining contest.

The win leaves Everton just four points adrift of the Champions League places, though the club have two games in hand on fourth-placed Liverpool who were beaten at home by Brighton.

Ancelotti was full of praise for his side’s response following a poor performance last weekend and says he was pleased to see a strong reaction from his players at Leeds.

“I said simply [after Newcastle], we lost the fighting spirit, we thought with our quality alone we could win the game but it was not enough,” Ancelotti told Everton’s official website after the game.

“I told the players to be back with the spirit we usually have in this kind of game and they were back.

“I am pleased because the reaction after the defeat to Newcastle was really good.

“The goal was to have three points and we won because of a really good first half.”

Ancelotti spoke in detail on the performances of his players and praised Ben Godfrey for his display at centre-back, whilst he credited Robin Olsen for a number of strong saves with the goalkeeper having replaced Jordan Pickford in goal.

The Italian was also pleased with Calvert-Lewin’s overall contribution in attack, with the England international scoring his 12th league goal of the season with his first goal in eight games.

“Ben Godfrey played really, really well as a centre-back,” said Ancelotti. “I am really surprised about his performances, he is always there, playing 100 per cent. He is fast and intelligent and strong, I am really pleased with him.

“Robin Olsen made some super saves, we knew it would be difficult. We won the game because we defended well and Olsen had a big part. He has confidence and we have confidence in him, he is an experienced goalkeeper and always ready.

“It doesn’t matter who scored. I was really pleased with Dominic, not because he scored but because he worked hard. This is what I ask from the players all the time.

“The work he did with Sigurdsson defensively was more important, we needed this kind of work from our strikers – Richarlison and Alex Iwobi included.

“It was the plan we had for Sigurdsson, to have control defensively of Kalvin Phillips, he did really well and, offensively, supported Calvert-Lewin.”

Read Also – A Country For Old Men: Ranking the five oldest scorers in the PL this season