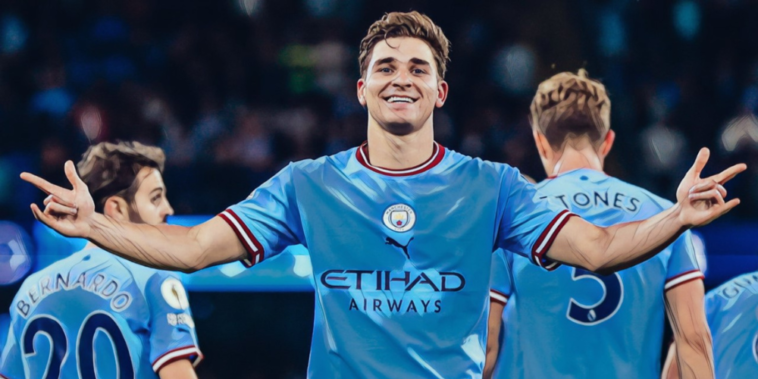 Julian Alvarez says he is keen to follow in the footsteps of Sergio Aguero as he looks to forge a successful career at Manchester City.

Alvarez signed for City during last January’s transfer window before linking up with the Premier League side during the summer, where he has since scored four goals in 16 appearances across all competitions.

The 22-year-old was viewed as one of South America’s brightest talents after an impressive emergence at River Plate and has outlined his desire to become the latest Argentine success story at the Etihad.

Alvarez is hoping to follow Aguero’s path to success at the club, with his compatriot the club’s all-time record goalscorer after hitting 260 goals across a decade at City.

“We all know what Kun did here, had a fantastic time here,” he told a pre-match press conference ahead of City’s clash with Sevilla on Wednesday.

“Amazing performances, great goals. All the Argentinians here have done well. When I arrived I wanted him as a reference, everyone remembers him with great affection. I’m happy to bring 100% effort and commitment and hopefully I’ll have as good a time at the club as he did.

“When I knew I might be coming, I had a chat with him, had regular contact over six months with him and other international players, what’s the place like and the club. Always good to have as much information as you can.”

Alvarez has had to be patient for his chance at City this season, with the presence of Erling Haaland having restricted the forward to just two league starts.

The summer arrival called Haaland one of ‘the best players in the world’ and believes the duo can work together to bring success to the club.

“It’s a privilege, always great to play alongside the best players in the world. He’s important for us, we’re as old as each other but we can both learn from each other. We both want to bring the best for the team.”