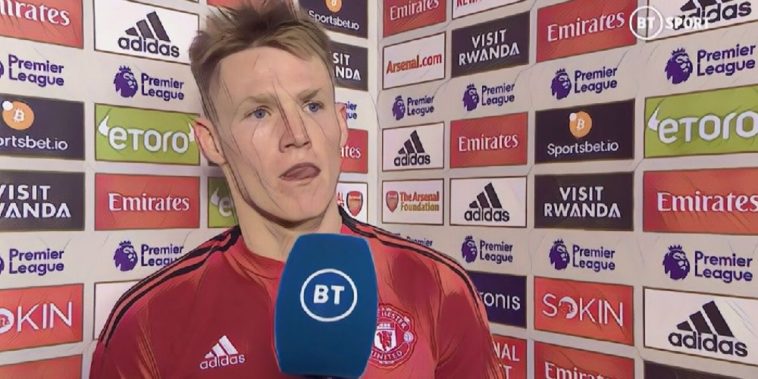 United came into the game on the back of a 4-0 loss to Liverpool, and started dreadfully in the Saturday lunchtime kickoff at Arsenal, some more woeful defending seeing them fall behind in the opening three minutes.

They would put in an improved performance to what they produced at Anfield, though a clumsy challenge from Alex Telles saw the Red Devils concede a penalty that Bukayo Saka converted to leave them with a mountain to climb.

Cristiano Ronaldo pulled a goal back before the interval before Bruno Fernandes squandered the chance to equalise from the spot as his tame penalty hit the post and went out.

Granit Xhaka secured the points with a long-range piledriver to end United’s hopes of finishing in the top four, and while the Red Devils will feel hard done by with some of the refereeing decisions, Scott McTominay said that there were a whole host of problems at all levels of the club, and said that the players need to take a long, hard look at themselves in the mirror.

“There’s a whole load of problems in terms of players, staff, everything higher up… we need to just concentrate on what happens on the pitch,” he told BT Sport.

"When we get back in the dressing room it's go home and take a look at yourself in the mirror."

"You can't go back to your house and be satisfied."

Scott McTominay speaking from the heart.

“There’s a lot of things going on in the dressing room, don’t get me wrong, but when we get back in the dressing room it’s ‘take a look at yourself in the mirror’. You can’t go back to your house and be satisfied with conceding three goals away at Arsenal when we deserved to win the game.

“For us, self-belief, lack of confidence, you can see it all in the last two months, which has been coming. We have a half-decent game today and even then it’s the belief, which is so big in football and confidence, it’s just not there at the moment.”

United confirmed the appointment of Erik ten Hag as their next permanent manager earlier this week, though asked whether the appointment offered more clarity, the Scotland international said that his side simply haven’t been doing the ‘basics’ right of late.

“For myself, it’s [about having] a bit of balls in your performances,” he said. “That’s what it comes down to, the fundamentals of football. It’s difficult for me to speak because you’re so high in emotions and the last two months but it comes down to the basics and we never do them well enough in big games recently.”