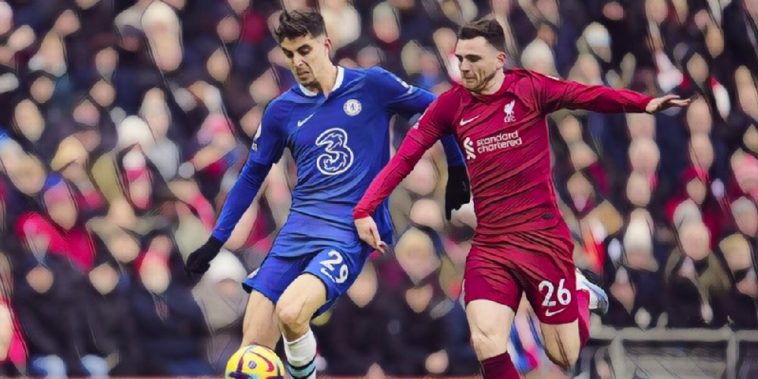 For so many years, this fixture has seen two of the Premier League‘s biggest sides slogging it out at the top end of the division and competing for the game’s biggest honours, though both came into this one in mid-table following a season of struggle.

Liverpool looked much better in their FA Cup replay victory over Wolves in midweek, and Jurgen Klopp opted to stick with the vast majority of that side that won at Molineux, with Thiago Alcantara once again being joined in midfield by Naby Keita and youngster Stefan Bajcetic.

Chelsea thought that they had got off to the most perfect start after they had the ball in the back of the net within the first three minutes, only for VAR to spot a marginal offside as Kai Havertz followed up Thiago Silva’s effort off the post.

However, it was a game that was sorely lacking in quality, with the rest of the first half passing by with very few presentable chances for either side.

Liverpool came out with a bit more intensity after the break, though were still unable to find a way through, while Mykhailo Mudryk looked lively for Chelsea having been brought on for his Blues debut in the second half.

Ultimately though, both sides lacked the quality in their chance creation and in front of goal, with the 0-0 draw leaving Liverpool nine points behind fourth placed Newcastle.

Speaking after the game, Jurgen Klopp seemed relatively pleased with his side’s performance but said there is still plenty to build upon.

Liverpool and Chelsea have now drawn their last 5 games in normal time:

“We started well first half and second half; we had good spells but couldn’t keep it up,” he told BT Sport.

“We have to be ready for little steps and this is a little step. A clean sheet against Chelsea, which is good. We didn’t create an awful lot of chances and they had some as well. We defended in the second half with passion and with clear organisation, because we were too deep in these moments.

“In the end, I’m okay with 0-0 because you have to accept these steps. Would I have wished for 45 and 45 minutes like we started each half? Yes, but we can build on that.

“Both teams were very aggressive, so that’s good. When you remember the games we had last year against them, the two finals, different games but they were hectic as well in moments

“Everybody told me about the game, and it’s true, it’s ninth against tenth and these kind of games happen. It’s absolutely fine and we have to build on stuff.

“We have good performances today. Everyone was committed to defending and in all parts of the game, really good organisation which is important as well.”

“Yeah, it would have been cool [if we had scored when we were on top at the beginning of the first half], but I would have also taken a goal when Trent shoots, I’d have taken that as well, and it would probably have been a better moment.

“I told the boys [at half time] that 70-75 percent is performance, so there is space for improvement. We can cause them more problems, we can put them under more pressure. We showed the boys situations where they struggled to defend against us and try to do it again, we did it well, but the game opened up again, and that’s how it is.”