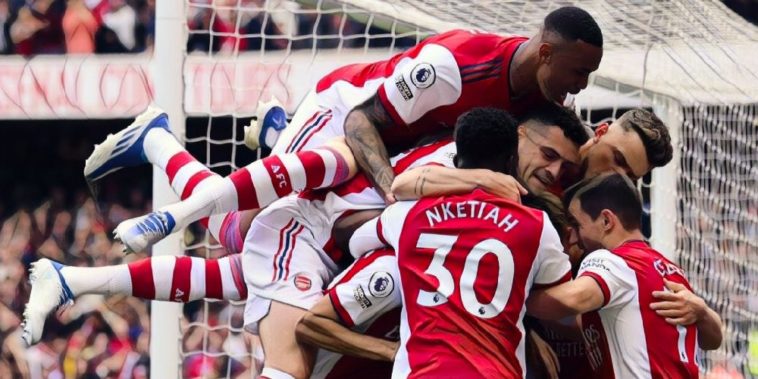 Arsenal kept their top four hopes alive with a 3-1 win over Manchester United despite what was a nervy display at the Emirates at times.

Manchester United came into the game on the back of a dreadful run of form, and within the first three minutes, their defensive fragility was in full view once again as Arsenal took the lead. Raphael Varane and Alex Telles both failed to deal with a ball across goal that fell to Bukayo Saka, the winger cutting onto his left and forcing a smart save out of David de Gea, though Nuno Tavares had continued his run into the box to poke home the Spaniard’s parry.

Unlike their 4-0 loss to Liverpool in midweek, the Red Devils did show a response after going behind, creating a number of chances as they looked to equalise, the pick of the bunch coming from Diogo Dalot, whose whipped effort came back off the bar.

Arsenal thought they had doubled their lead as Eddie Nketiah lashed past De Gea, though VAR ruled it out for offside. However, having reviewed the pitchside footage, referee Craig Pawson pointed to the spot following a coming together between Alex Telles and Bukayo Saka in the buildup. Saka had stroked home a late penalty in the 4-2 win over Chelsea, and the England international repeated the trick to make it 2-0.

The two goal advantage only lasted for two minutes, however, Cristiano Ronaldo returning to the side to net his 100th Premier League goal, getting in front of Gabriel Magalhaes to get on the end of a Nemanja Matic delivery from the left with Aaron Ramsdale left in no man’s land.

Manchester United would be given a glorious opportunity to level the scores 10 minutes into the second half as the ball hit Nuno Tavares’ outstretched arm from a corner, however, Bruno Fernandes fluffed his lines from the resulting spot-kick as it hit the post and went out for a goal-kick.

United continued to push for the equaliser as Ronaldo had one chalked off for the most marginal of offsides, while Diogo Dalot had an effort tipped onto the post by Aaron Ramsdale.

Arsenal had looked nervy on a number of occasions throughout the game, but Granit Xhaka settled those nerves as he fired an absolute piledriver of a strike beyond a perhaps unsighted David de Gea after Bruno Fernandes had been dispossessed in his own half.

Speaking after the game, Arsenal boss Mikel Arteta admitted that ‘luck’ was on his side’s side at times, but said they produced ‘real quality’ in the key moments of the game.

Two huge wins in a week for the Gunners. 💪 pic.twitter.com/GVr5NCMGto

Nuno Tavares’ goal was his first for the Gunners, though the Portuguese had a difficult afternoon at times, particularly in the opening stages of the second half.

“The way he played as well. He had difficulties in the second half a bit but we helped him with a change of shape. They are really young. You can sense it at some stages in games that we have to make other decisions.”

The result moves Arsenal back into the top four, three points ahead of Spurs who face Brentford this afternoon, and with five games remaining, Arteta said the race for the Champions League will continue to be a rollercoaster.

“I said this is going to be a rollercoaster,” he said. “The winning and losing in this league is small margins. Today things went our way and we are really happy.”

One negative from the afternoon came as Bukayo Saka was withdrawn through injury, though Arteta was pleased with his side’s effort despite a number of players struggling for fitness.

“We had four or five with difficulties to make the team before. He was one, White was one, Granit had an eye issue, Eddie hasn’t played many minutes. The boys are doing everything they can to be on the field and I feel lucky.”