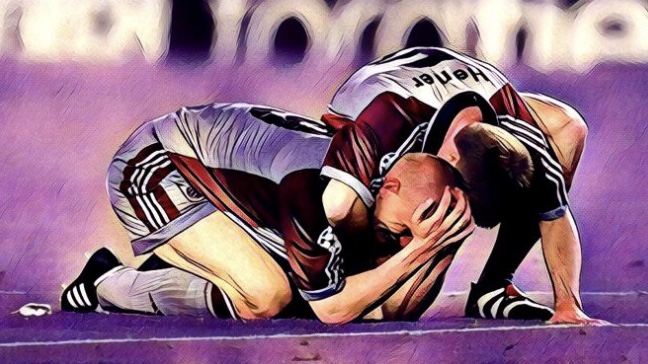 Nobody likes being behind in a game. Everybody loves winning. But the best games are those when you can turn the most likely of defeats into the most incredible victories. Here are five of the best footballing comebacks of all time.

For many people, when you talk about great comebacks, this is the one that first comes to mind and in many ways it’s actually better than the Barcelona one because well, it was the Champions League final and Liverpool are not Barcelona.

You kind of expect Barcelona to score six if they need to, whereas when the teams went in at half time in this game all anyone was wondering was how much worse it might get for the Merseyside team. AC Milan had been utterly dominant in the first half and 3-0 was a fair reflection of the gulf in class between the sides.

I watched this game in a student bar in the middle of exam time and seriously considered leaving to watch the end at home, luckily I had a bit of a thirst on at that stage and that “one more pint” allowed me to witness one of the greatest and improbable comebacks of all time.

What is it about Arsenal and the number four? It haunts them. Back in 2011 they went away to Newcastle and promptly managed to go four up inside half and hour, leaving the home side looking dead and buried as they went in for tea and slices of orange.

But, and even if you didn’t know about this game, given what’s been happening recently you could probably guess what happened next. A red card shortly after half time for Abou Diaby led to a complete collapse culminating in Cheik Tioté’s greatest ever moment on a football pitch.

PSG looked to have one foot in the Champions League semi finals after humiliating Barcelona 4-0 at the Parc des Princes.

With an almost impossible task ahead of them, Barcelona started brightly, getting a 2-0 lead at half time and adding a third just five minutes into the second half.

However that hope looked to have been extinguished as Edinson Cavani made it 5-3 on aggregate with just 28 minutes to play. The score stayed that way until the 88th minute when Neymar scored what looked like a consolation for Barcelona, but it was just the start of something incredible.

Two stoppage time goals, one from Neymar and a 95th minute winner from Sergi Roberto was enough to secure one of the most sensational turn around as in footballing history.

Perhaps we shouldn’t even include this one, comebacks are mostly amazing because they normally come out of nowhere and are completely unexpected. This one seemed inevitable. Remember the now legendary commentary before Sheringham’s equaliser, “Can Manchester United score? They always score” said Clive Tyldesley, seconds before the ball hit the back of the net. But this deserves it’s place on the list.

It was the Champions League final, it completed a historic treble of trophies and like all comebacks left the losing side devastated. The images of the Bayern players, strewn around the pitch, some in shock, some thumping the ground in anguish are as iconic as any of the shots of the victorious Manchester United team.

Back in 1999 the current money-bags of the Premier League were struggling to get out of the third division of English football. Unable to gain automatic promotion City were forced to navigate the play offs and faced Gillingham in the deciding game. With just nine minutes to go Gillingham took the lead and then doubled their advantage five minutes later. It looked like City would be staying down, it looked all over, but two late goals in the five minutes of injury time changed the course of the game and the future of the club.