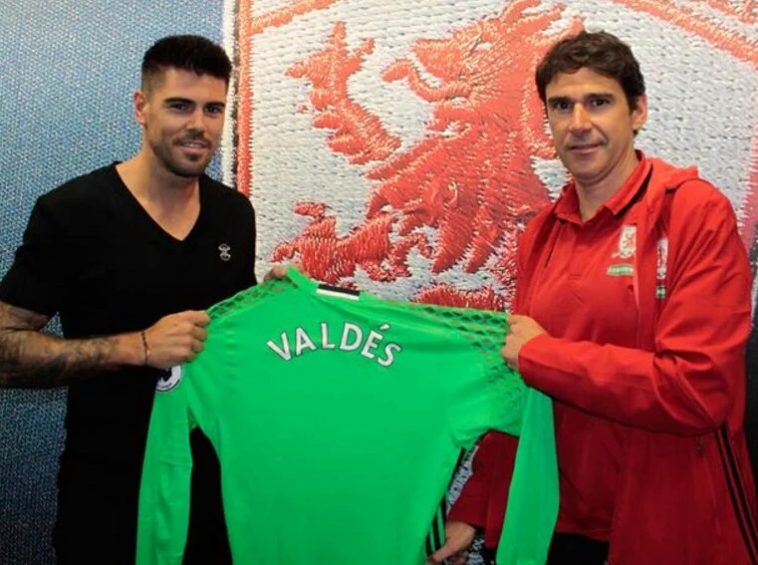 Middlesbrough have not exactly had the greatest of 2017’s. After being promoted from the Championship in 2016, Middlesbrough looked to secure their Premier League survival by bringing in a number of big players.

This article looks at 3 key Boro players who could leave in the summer, especially if Middlesbrough were relegated.

Arguably Boro’s best signing of the summer was Valdes. The Spaniard signed for Boro in the summer of 2016 on a free transfer from Manchester United. Valdes struggled to find form at United making just two appearances while there.

He came to Boro in the hopes of reviving his career and that’s exactly what he did. Valdes has made 25 appearances for the reds and has kept 7 clean sheets in the process. He is most certainly an integral part of Middlesbrough’s impressive defensive record.

The Teessiders have let in just 28 goals all season, the 5th best in the league.  The Spaniard often makes several key world class saves in a game and without him it wouldn’t be ridiculous to assume Middlesbrough would be a lot further down the table.

Therefore if Middlesbrough go down it would be safe to assume Valdes is way too good for the Championship and he would most definitely leave the club. Also even if Boro do escape the drop, Valdes has once again proven he is a world class keeper and if an offer came in and he wanted to leave he could easily play for a much better quality team than Middlesbrough. Simply put, Valdes is much better than Boro and now his career is back on track, there is nothing stopping him moving to a bigger club.

After a great loan spell at Boro in the 2015/16 season, Gaston joined Boro on a free in the summer from Southampton and has been one of Middlesbrough’s best players. He played a key role in getting Boro promoted. Ramirez has also, at least for the first half of this season been Boro’s most creative player.

However in the January window, Ramirez handed in a transfer request, looking to force a move to Leicester. Despite this, Karanka did not sell the Uruguayan. A combination of injury and transfer speculation kept him out of the side for several weeks.

Although Gaston is now back in the starting line up for Boro, he is still clearly one of Boro’s better players and if Middlesbrough do go down he will most certainly leave. Even if they avoid the drop, Gaston may once again wish to pursue his January goal of moving to Leicester. Either way the chance of Ramirez being a Boro player at the start of next season is very small.

The one saving grace of Middlesbrough’s poor season has been their defensive performances. They have conceded just 30 in 27 games. Only Chelsea, Spurs, Man City, United and Everton have conceded less. A major part of Boro’s defensive prowess has been due to 24 year old Ben Gibson. Gibson came through Boro’s academy and has a special place in his heart for the club. Especially with the fact his Uncle, Steve Gibson is the Charmin.

However after a solid season in the Championship, in which Boro conceded the least goals all season combined with being Boro’s best and most consistent centre back this season, Gibson is on several clubs radars.

Rumours were rampant in January with Gibson being linked with a move to Chelsea. If Boro are relegated there is a strong possibility they may once again try and tempt Gibson to Stamford Bridge.

Furthermore as Ben is English and decent English centre backs are hard to come by and expensive, there is a strong possibility a Premier League team will come in for him in the summer as he has proven he is worthy of playing in the top division. Plus he is still only 24 and is improving all the time.

I believe Gibson is the least likely of the 3 players in this article to leave. However if Boro go down, the likelihood that he will leave will certainly increases.