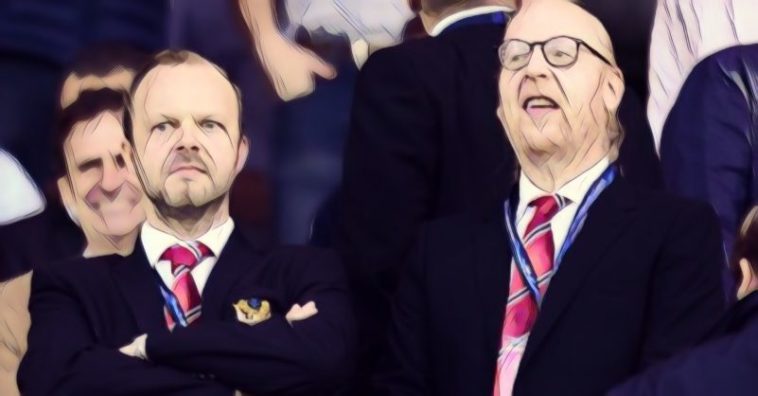 Having announced record revenues of £627.1 million, Manchester United executive vice-chairman Ed Woodward has updated investors on a number topics, including player recruitment, the proposed ‘Head of football’ role, and the clubs ‘long-term strategy’.

As happens every year when Manchester United announce their annual financial results, Ed Woodward hosts a truly enthralling conference call with a number of the club’s investors, which usually includes a load of guff about how amazing the club is, how many sponsors it has, how many fans and twitter followers they have, and how many people have downloaded their app.

Well, if you are into all that, then you would have been in for a real treat…but if like us, you aren’t interested in the slightest, you’ll be pleased to hear that we won’t be boring you with the details of all that.

While he often seems to be public enemy number one among the Old Trafford faithful, many United fans do seem keen to know what Mr Woodward has had to say on certain issues, and cutting through the crap of his comments, he finally got round to suggesting the club will have patience with Ole Gunnar Solskjaer, saying the clubs recruitment is now focussed on a ‘long-term strategy’.

“Some of the senior staff in these roles have been at the club for over 10 years. Recruitment recommendations and decisions are worked on, on a day-to-day basis by this department and the manager and his team.

“These investments together with the commitment we made to Ole and his coaching staff in March have given us the building blocks for success.

“Whilst we’re confident this investment will deliver results, it’s important that we’re patient, while Ole and his team build for the future. We will continue to focus on the long-term strategy and won’t be influenced by short-term distractions.”

The club have been linked with appointing a director of football for the best part of 12 months now, with a number of former players including Rio Ferdinand, Darren Fletcher and Patrice Evra all having been touted as possible candidates, with Evra taking to social media to offer his services to the club’s board following the weekend defeat to West Ham.

However, Woodward seemed to confirm previous suggestions that whoever ends up being appointed will not be heavily involved in player recruitment, believing the current way of doing business ‘is the right one’…which presumably means not signing a midfielder or a striker?

“Regarding the speculation around the Head of Football, we are continually reviewing and looking at the potential to evolve our structure on the football side,” Woodward added.

“Much of the speculation around this type of role revolves around recruitment – an area that we’ve evolved in recent years.

“We feel the players we’ve signed in the summer demonstrate this approach is the right one.

“Returning to the roots of our club’s ethos, of youth-led, attacking football, is the right way forward and everyone at the club – the board, the manager, the squad and all of the staff, remains resolute in our desire to get Manchester United back to the top of English football.

“We’ll continue to make the necessary investments to make this happen, across our first team players, our academy and our recruitment department.”

As part of their summer overhaul, United sent Alexis Sanchez on loan to Inter Milan while Chris Smalling was loaned to Roma, though rather embarrassingly, one investor decided to ask Mr Woodward what a player loan was… oh dear.