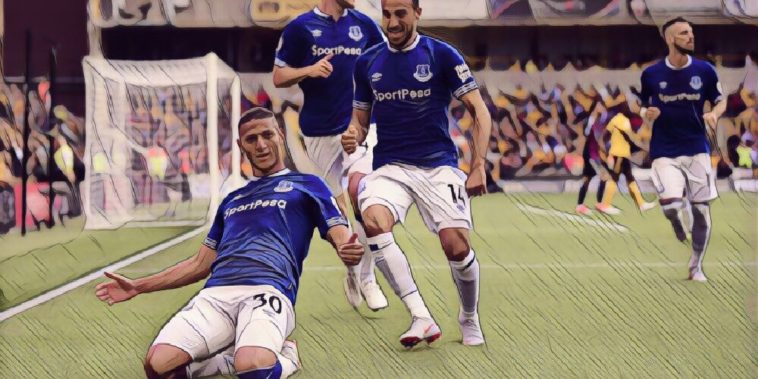 Wolves finally made their Premier League return this afternoon as thet welcomed Everton to Molineux for the late kick-off, a game filled with goals and controversy.

A lot was said regarding the transfer of Richarlison from Watford to Everton this transfer window. Despite the fact that only through add-ons would the transfer cost £50 million, with the initial price being around £35 million, it was the first figure that a lot of the pundits banded about. Paul Merson even went as far as to say that it “ruined the transfer window.”

However, as the saying goes, actions speak louder than words, and Richarlison certainly showed why Everton were so keen to sign the 21-year-old. His two goals and work rate throughout the entirety of the game was one of the key reasons why Everton earned a point, with the second goal being a thing of beauty.

When at Watford, Richarlison, under Marco Silva recorded five goals and four assists. However, after Silva left Watford, Richarlison didn’t find the net again or make an assist for the rest of the season. If the Brazilian can rediscover his early form once more than Everton may have a special player on their hands.

A case for VAR?

After VAR was generally deemed a success during this summers World Cup, it was only a matter of time that fans would there would be a decision that could really do with the Video Assitant.

Phil Jagielka’s tackle on Diogo Jota saw him shown a straight red, but the decision has split opinion about whether or not it was the right decision and that’s something VAR would surely help within that situation.

VAR may not be perfect, but implemented in tonight’s game and Marco Silva and the Everton faithful may have been travelling home feeling a lot more satisfied.

Neves makes the step up with ease

There was never really any doubt that Ruben Neves would be able to make the step up to the Premier League from the Championship and this game showed that.

Popping up with a glorious free-kick and then a lovely assist for Wolves’ second goal, as well as his 111 touches and made 93 passes, more than any other player. The Portuguese star showed why Wolves are extremely lucky to have kept hold of him for this crucial Premier League season.

If Neves can performance to that standard virtually every week then Wolves’ hopes of a top half finish this season will become increasingly likely.

Wolves will be alright

It’s never a good idea to try and predict how well a team will do in a season based off one game, especially when they’ve only just been promoted. However, Wolves should have the ability to beat far weaker opposition than Everton based off tonight’s game.

Willy Boly looked solid in defence against Cenk Tosun, whileNeves and Moutinho contributed well pulling the strings for Wolves in the middle of the pitch. As well as that Jimenez, the new loan signing from Benfica, is already off the mark.

If these players can keep their performances up all season as well as Wolves’ other Championship stars such as Jota and Costa having more of a say, Wolves may be looking up the table rather than down this season.

Everton’s record on the road last season was nothing short of a shambles with the Blues recording just three wins away from home last season. It was only Everton’s home form that prevented The Toffees from having a much more nervous end to the season.

Many times last season, the Blues crumbled on the road such, as the 4-1 defeat to Southampton after going 1-0 up, as well as the 3-1 defeat to West Ham. Not forgetting the constant battering’s from the top six.

When Jagielka was sent off in the 40th minute many of the Goodison Park faithful may have felt the game would turn on its head and Wolves would take control. However, the complete opposite happened and Everton put in a resolute performance which could have won the game had they taken their other chances.

If Everton can continue like this with 11 men on the pitch then it’s possible a much stronger season than last is ahead.