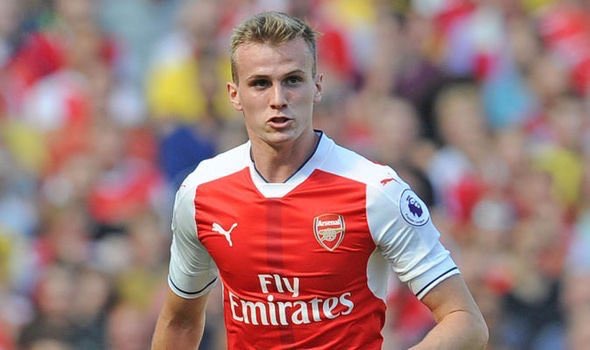 Arsenal beat Manchester City 2-1 to reach their third FA Cup final in four years. Alex Oxlade-Chamberlain was named Man of the Match and rightly so. He put in a stellar performance and never gave up, providing a beautiful cross for Nacho Monreal’s equaliser.

However, Oxlade-Chamberlain wasn’t the only player deserving of the Man of the Match award. The other player was Rob Holding.

Operating in a back three alongside Laurent Koscielny and Gabriel, young Holding was superb. He made eight clearances, six recoveries and two tackles as well as having 56 touches. What a solid performance.

Holding was calm, composed on the ball and completely unfazed by the big occasion despite a lack of experience.

Rob Holding has made just four Premier League appearances this season and 12 in all competitions. He has started Arsenal’s last two games and impressed in both. For somebody who has not played much football this season, it could have seemed risky to bring Holding in. Even more risky to expect him to settle into a new formation.

He has done exactly that. This is made even more impressive by Rob Holding admitting that Arsenal have only practiced their new 3-4-3 formation twice.

Holding was signed from Bolton Wanderers last summer for around £2m. He made 30 appearances during his first senior campaign in 2015-16 for the Trotters. The English defender also won their player of the season award.

When Arsenal drew 0-0 with Leicester City in August, Gunners supporters were chanting for Wenger to spend money on new players at the final whistle. Wenger sarcastically commented on this during his post-match press conference saying: “Nobody is speaking about the performance of Rob Holding today. You should be happy; he is English, he is 20 years old, but I’m sorry he didn’t cost £55m, so he cannot be good.”

Wenger made a valid point. Rob Holding did not cost a ridiculous amount of money like the £48m spent on John Stones for example, but that doesn’t have any influence on his defensive abilities.

While it’s important not to get carried away as Rob Holding is still very young and has a lot to learn, he has shown that he can perform on the big occasions.

With experienced defenders Laurent Koscielny and Gabriel alongside him, Rob Holding could go from strength to strength as part of a back three and at Arsenal.