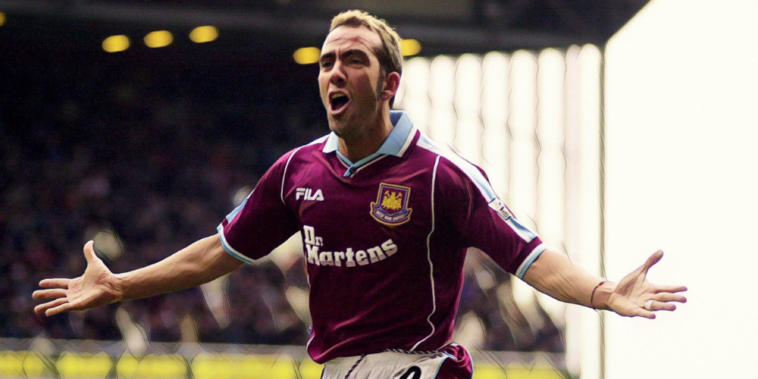 The Englishman has now solidified his status as a certified club legend following his goalscoring exploits in recent seasons, his latest strike placing him among some of the greatest talents to have adorned the claret and blue jersey in the last 20 years or so.

With that in mind, here’s a look at the five highest goalscorers for West Ham in the Premier League era.

Having begun his professional career with Blackpool in 1989, followed by a notable spell at Queens Park Rangers, Trevor Sinclair joined the Hammers on a £2.3m deal in 1998, going on to enjoy an impressive five-year stint at Upton Park.

Signed in the January of ’98, Sinclair scored seven goals in just 14 league games for the club in the back end of that season, helping Harry Redknapp’s side achieve a respectable eighth-place finish in the table.

The following season proved to be even better for the Hammers as the club finished fifth, with Sinclair netting seven in the league again that season, before matching that tally in the 1999/2000 campaign.

A serious knee injury restricted the winger to just three goals in 19 Premier League games the year after, but he returned to become a mainstay in the side once again with his form culminating in the awarding of a first England cap in 2001.

After five goals in 34 league games during the 2001/02 campaign, he was named in Sven-Goran Eriksson’s 2002 World Cup squad as a late replacement for Danny Murphy, eventually securing a place in the side on the left-flank and earning four of his 12 Three Lions caps at the tournament.

Buoyed by his international exploits, Sinclair’s return to West Ham saw him net a career-best tally of eight Premier League goals the following season, though his haul was not enough to prevent relegation with Sinclair departing for Manchester City in 2003.

After failing to truly make the grade at big spending Chelsea, Carlton Cole made the move to their London rivals in 2006, going on to become a reliable, albeit less than prolific, presence at Upton Park over the next nine years.

Despite netting on his debut against Charlton, the forward failed to truly establish himself in the side during his first two seasons at the club, before eventually finding his feet to net a promising tally of ten league goals during the 2008/09 campaign.

The following season saw Cole score another ten league goals, despite missing a fair chunk of the season through injury, with that tally helping Gianfranco Zola’s side avoid relegation and earning the player international recognition.

That drop into the second tier did eventually come in 2010/11, but despite rumoured interest from elsewhere, Cole stayed with the Hammers to help fire them straight back into the top-flight, netting 14 Championship goals as well as the opener in a 2-1 win over Blackpool in the play-off final.

Having struggled to replicate that form in the top tier, netting just twice in the 2012/13 campaign, the former Blues man was released at the end of the season, before being re-signed in the autumn after the club had failed to acquire a replacement.

He scored eight more league goals over the course of the next two seasons, before departing for short spells in Scotland, the US and India.

Affectionately named ‘Mr West Ham’, Mark Noble is the embodiment of a true one-club man, having spent his entire career to date with the Hammers, initially making his debut for the club at the age of just 17 in a League Cup tie with Sheffield United way back in 2004.

After brief loan stints at Hull City and Ipswich Town in 2006, the young midfielder returned to the West Ham first-team for the second-half of the 2006/07 campaign, netting his first ever top-flight goal with a superb volley in that barnstorming 4-3 defeat to Tottenham at Upton Park in March 2007.

Since then the stalwart has been a mainstay of the Hammers midfield, sticking by the club following their relegation in the 2010/11 season, before going on to be named club captain in the 2015/16 campaign under Slaven Bilic.

That season saw him enjoy his best goalscoring season thus far having netted eight top-flight goals, the large chunk of which came from the penalty spot, with Noble having been the club’s regular spot-kick specialist over the last decade, netting 27 from 31 attempts in the Premier League.

Now 34, the Englishman is into the final season of his stellar career with the club, having announced that the 2021/22 season will be his last year with his beloved Hammers.

At present, he is the longest-serving one club man in Europe’s top five leagues, while he also leads the way by some margin as West Ham’s highest appearance maker (403) in the Premier League era.

From the reliable consistency of Noble, to an undisputed footballing maverick in Paolo Di Canio, the Italian perhaps one of the most iconic and celebrated players to have adorned the claret and blue in the modern era.

A no doubt controversial figure throughout his time as a player and as a manager, Di Canio enjoyed arguably the best spell of his playing career, at least on British shores, with West Ham, producing a string of eye-catching moments in his four-year stint in east London.

After flitting between some of the giants of Italian football and impressing in brief spells at both Celtic and Sheffield Wednesday, the mercurial talent arrived at Upton Park in January 1999, having returned from a lengthy suspension after pushing a referee during his time at Hillsborough.

While there would be similar acts of madness during his time with the Hammers, his defining moment is undoubtedly his breathtaking goal against Wimbledon in March 2000, netting an outrageous volley that remains one of the Premier League’s greatest goals.

A similarly recognisable moment was his surprise act of sportsmanship in a clash with Everton in December 2000, Di Canio spurning a clear goal-scoring opportunity and stopping play with opposition stopper Paul Gerrard stricken with injury.

After reportedly shunning the advances of Manchester United in 2002, he remained with the Hammers for another 18 months before moving to Charlton, ending his West Ham love affair with 51 goals in 141 games in all competitions. He retired in 2008 after a stint in Italy.

Alongside the legendary Italian now sits Michail Antonio, the versatile forward netting his 47th top-flight goal for the club in the 4-2 win over Newcastle United at the weekend.

For many, it may have come as something of a surprise to see the former non-league man develop into a prolific forward, having originally joined the Hammers from Nottingham Forest as a winger, before slotting in at right-back on occasion during his first few campaigns in London.

Having netted an impressive 17 Premier League goals in his opening two seasons for the club, the goals dried up somewhat over the next two years, before the return of David Moyes in December 2019 appeared to reinvigorate the former Reading man.

With a succession of forward additions having struggled to perform for the club in recent years, including club-record signing Sebastian Haller, Moyes turned to Antonio as his man to lead the line.

The move paid instant dividends as Antonio ended the 2019/20 campaign with 10 league goals, including scoring all four in a 4-0 win against Norwich in July 2020.

Last term was equally as impressive as he once again registered ten league goals as West Ham secured Europa League qualification, his form somewhat ending the clamour for a new recognised centre-forward addition.

His latest strike against the Magpies has not only moved him up this list, but also served as a reminder of the attributes which make him so vital to Moyes’ side, his speed on the counter a real asset, particularly when combined with his improving end product.

It is now the case of when and not if he surpasses Di Canio goalscoring record. As he said himself, “not bad for a right-back”.