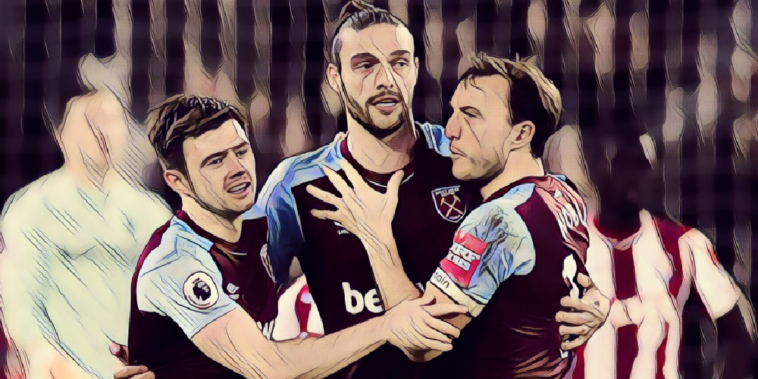 A 1-1 draw was a far more satisfying result for the Hammers than Stoke City in Monday night’s relegation battle at the London Stadium. Here are five things we learned.

Until the second half arrival of veteran striker Peter Crouch, Stoke City looked unlikely to score in what was an important encounter against the Hammers.

A team that relies on the admirable abilities of a 36-year-old Peter Crouch would seem to be short of firepower, as his best days are surely behind him. If Stoke are to avoid the drop, they need someone to step up and score a few goals – and quickly! Who that player may be, is a question manager Paul Lambert must be asking this morning.

The feeling amongst many fans leaving the London Stadium was that West Ham had missed a trick by being too cautious by playing with a solitary striker.

However good Marko Arnautovic is at holding the ball up, he does need help. Too many times he won the ball and had no support within 20 yards.

David Moyes should have thrown caution to the wind and played Javier Hernandez as a second striker, especially in a game that was there for the taking.

Home form will be key to West Ham’s survival

West Ham have now only lost one of their past seven home games in the Premier League and with three more games to come at the London Stadium, continuing this good record will go a long way to ensuring survival.

Both Manchester clubs play the Hammers before Everton arrive on the last day of the Premier League season. A minimum of four points from those games should be enough for West Ham to guarantee Premier League football for next season.

Xherdan Shaqiri will leave in the summer

He will not want to grace the Championship next term and so other Premier League teams will be queuing up to buy the one and only in-form player Stoke City currently possess.

In Monday night’s fixture, Shaqiri, with the possible exceptions of Joe Allen and Crouch, was the only Stoke player who threatened to upset the home side. It was his shot that Hart spilled to allow Crouch to score, and on many ocasions he was the only Potters player able to hold on to the ball for any length of time.

Andy Carroll continues to be a talisman

The much maligned and seemingly constantly injured Andy Carroll rescued a point for the Hammers with a late strike, his third goal this season in his first appearance since early January.

When he is fit, Carroll is one of the best centre forwards in the country and a handful for any defence. Unfortunately, his fitness and the ease with which he picks up injuries has always kept him out of the West Ham team, especially at times when he his most needed.

Many fans have now lost faith in this talismanic striker and would not be disappointed to see him go in the summer. The problem is, where would he go and would he pass any club’s medical examination.