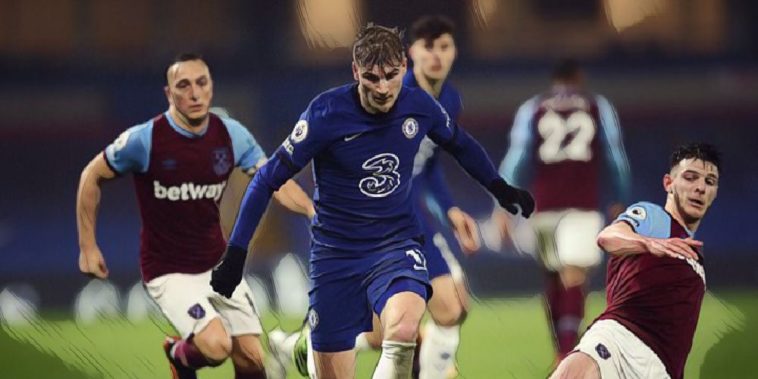 It’s fifth versus fourth on Saturday evening, as West Ham United take on Chelsea in a potentially pivotal encounter in the battle for the top four.

Here’s all you need to know about that meeting at the London Stadium:

David Moyes is not often seen as the most expansive manager in the Premier League, yet his side simply can’t stop scoring of late, having hit eleven goals in just their last four league games, all of which have been thoroughly entertaining high-scoring encounters.

After seeing off a late Leicester City charge to clinch a 3-2 win the week before, the Hammers were then on the wrong end of the same scoreline at St James’ Park, as Newcastle United claimed a valuable and shock victory in their bid for survival.

Steve Bruce’s side have been in improved form of late and went in at the break with a two-goal lead, although they largely had their opponents to thank for that advantage following a catalogue of defensive errors, including a sending-off for defender Craig Dawson for two bookable defences.

Despite being a man light, the away side reacted strongly in the second-half, Issa Diop making up for his first-half own goal with a fine header, before Jesse Lingard continued his breathtaking streak, the England international netting his ninth goal in just his tenth league game for the club from the penalty spot.

However, a late strike from on-loan midfielder Joe Willock secured the points for Bruce’s men, leaving the Hammers in fifth and level on points with London rivals Chelsea in fourth, as the race for  a Champions League spot continues.

Ahead of this weekend’s potentially pivotal clash, West Ham will be sweating on the fitness of the in-form Lingard, the 28-year-old having limped off in the latter stages of last weekend’s defeat.

Amid the dramatic events unfolding in the football world on Tuesday evening, the Blues meeting with relegation-threatened Brighton was something of a sub-plot, the game finishing as a goalless draw in which the Seagulls perhaps deserved victory.

The match had been forced to start 15 minutes later than planned due to protests outside Stamford Bridge regarding Chelsea’s planned involvement in the European Super League, with that fan fury ultimately sparking a swift withdrawal from the breakaway league for the Blues prior to kick-off.

Thomas Tuchel’s admitted that the ESL backdrop was somewhat of a distraction to his side, as they simply couldn’t get going on the night, their solitary point meaning that they are now level on points with the Hammers, albeit with a superior goal difference.

That result also means the Blues have now lost just once in 13 league games since the German took charge, having lost five of the eight directly before that under former boss Frank Lampard.

Such a stellar run of form has left the club well placed to secure Champions League football next term, while they also have a semi-final clash with Real Madrid to come in this season’s competition next week, as well as the FA Cup final against Leicester City on 15 May.

As for this weekend’s encounter, Tuchel will likely be without both Mateo Kovacic and Thiago Silva once again due to injury, although Kepa Arrizabalaga could keep his place after starting the last two games in all competitions.

The Hammers had done the double over their London rivals in the 2019/20 campaign, yet it was the Blues who took all three points earlier this season, the two sides having met just before Christmas.

The visitors thought they’d taken an early lead through former Chelsea youth player Declan Rice, only to be denied by an offside flag, before the home side went ahead just moments later through summer signing Thiago Silva, the Brazilian with a superb thumping header.

That lead appeared slim in a tightly-contested second period before academy graduate Tammy Abraham netted a quick-fire double late on with two well-taken finishes to wrap up all three points for Frank Lampard’s men.

Abraham remains the club’s top scorer this season with 12 goals in all competitions, despite having largely struggled to even make the matchday squad under new manager Thomas Tuchel.