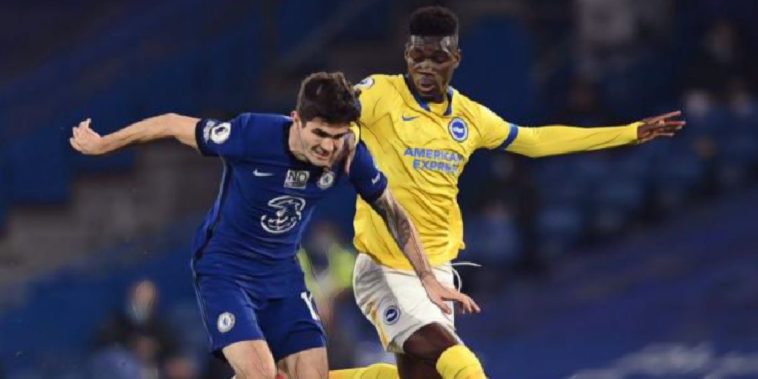 With everything that has been going on, its easy to forget that there was an important Premier League fixture taking place this evening, Chelsea and Brighton playing out a 0-0 draw at Stamford Bridge.

It was a game that was played against the widespread backlash of the European Super League proposals, which within the hour before kick-off, looked to have come crumbling down before it had even made it to the starting blocks.

Chelsea, who were one of the initial 12 sides to sign up to the controversial plan, were the first to be reported to be withdrawing following the mass outrage, outrage that manifested itself outside Stamford Bridge with fans airing their frustrations and preventing the teams from approaching the stadium and delaying kick off by 15 minutes.

After all the excitement and elation at the ESL news, it would turn out to be somewhat of a damp squib of a game, with neither side fashioning any real chances of note, with both teams defenders on top for the vast majority of the game.

The game would somewhat spring to life in the 76th minute though, Adam Lallana pinching the ball off the dawdling Kurt Zouma, only for the former Liverpool man to put his effort from the edge of the box wide of the post. Danny Welbeck would then see an effort crash off the post two minutes later after picking the pocket of the Chelsea defence once again.

Brighton would see Ben White sent off for a second bookable offence in the 92nd minute after the defender cynically brought down Callum Hudson-Odoi during a breakaway, though the Seagulls would hold on to earn a point to move seven points clear of the drop zone.

As for Chelsea, they moved into the top four courtesy of their superior goal difference over West Ham, and speaking after the game, Thomas Tuchel suggested his side were ‘distracted’.

❌ Chelsea produced 7 shots against Brighton, their lowest in a PL game under Thomas Tuchel. They had averaged 16 shots per PL game under Tuchel before tonight #CHEBHA pic.twitter.com/s019B6jGVU

“It was not our best game – the opponents defended well and we weren’t in the same rhythm. Maybe we were tired and a bit distracted, maybe a combination and it wasn’t our best performance,” he told Sky Sports. “We were perhaps lucky not to lose and we couldn’t get any big chances today and there were some mistakes in our decision making. We have to accept we weren’t good enough to win today.

“We were clearly tired, we have had several travels and tough matches and we suffered a bit from the strong line-up at Wembley and the guys could not find their rhythm and structure for counter-pressing and we tried to change the system which didn’t really well. We didn’t deserve to win.”

Asked how the pre-match talk about the European Super League affected his side, Tuchel said: “I don’t know how much the distraction hindered us. It’s not necessary to talk about it. We can’t find out. it was there, but we have to accept it and we could not our find our best game, but we played a strong opponent who defended aggressively and we could not find the decisive breakthrough.

“It hasn’t been tough at all, The situation was.not clear, I was informed like you were informed and it was not so tough. It wasn’t strange, there has been no other subject, you didn’t ask me about the match at all beforehand. You prepare a match, but it is strange that nobody is talking about it. It wasn’t though, it was just the way it was.

“I was totally focussed on the match, and I was clearly not happy, nobody was and that can happen even if we had the best preparation. There are no excuses.”

Next up for Chelsea is a potentially decisive fixture in the race for Champions League football against West Ham, a race which has been reinvigorated by the developments of the evening.