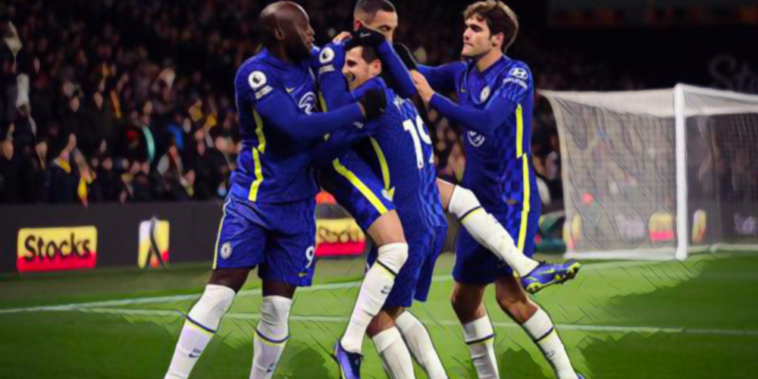 League leaders Chelsea take on London rivals West Ham United at the London Stadium this weekend, the Blues having done the double over the Hammers last season.

Here’s everything you need to know ahead of Saturday’s encounter:

West Ham have hit something of a sticky patch of late, having failed to win in their last three league games, losing away at Wolves and Manchester City, before slipping to a draw with Brighton and Hove Albion on Wednesday night.

The Hammers had put up a real fight in blizzard-like conditions against a classy Man City outfit at the weekend, although were far from at their best against Graham Potter’s side in midweek, conceding an 89th minute overhead kick from Neal Maupay to squander all three points.

A sublime effort late in the game 👏

That eventual draw will have been all the more frustrating for David Moyes as his side were controversially denied a second for offside by VAR, while the visitors’ late strike came despite them having been reduced to ten men following a succession of injuries.

Nevertheless, there is no need to panic as the east London outfit remain well-placed in the battle for that much-coveted fourth Champions League spot, having narrowly missed out on the top four last season.

There is, however, potential question marks regarding whether the Hammers have the squad depth to continue to churn out results during this hectic festive schedule, with the lack of a striking alternative to Michail Antonio a particular concern.

As for this weekend’s visit of Chelsea, Moyes may be able to welcome back left-back Aaron Cresswell with the Englishman having been absent in midweek, although Angelo Ogbonna remains set for an extended spell on the treatment table.

The hallmark of champions is managing to get a result when not at your best, with Chelsea having done exactly that in midweek to overcome a spirited Watford side to maintain their place at the top of the Premier League table.

The Hornets had dismantled Manchester United at Vicarage Road a few weeks earlier and again caused the Blues all sorts of problems on Wednesday evening, the league leaders struggling to find any sort of rhythm against the newly-promoted side.

However, having been level at the break following goals from Mason Mount and Emmanuel Dennis, the European champions managed to conjure up a winner late on through Hakim Ziyech, with both of the visitors’ goals having been of real quality in what was an otherwise underwhelming display.

One notable headline from that victory – which leaves Thomas Tuchel’s side a point ahead of Manchester City at the summit – was the withdrawal of summer signing Saul Niguez at half-time, the Spaniard suffering the same fate as he did on his only other league start against Aston Villa.

The on-loan midfielder had come into the side for the rested Jorginho, the Italian having gone from villain to hero in the 1-1 draw with Manchester United at the weekend, netting a late penalty to secure a deserved point after his earlier error had allowed Jadon Sancho to score.

As for this weekend’s outing, the likes of N’Golo Kante, Mateo Kovacic and Reece James are all doubts, while Ben Chilwell is set to be out until the New Year. Versatile defender Trevoh Chalobah is also out having been forced off on the hour mark against Watford.

The two sides last met at the back end of last season in what was a pivotal encounter in the battle for the top four, having been level on points in fifth and fourth, respectively, heading into the match at the London Stadium.

It was Chelsea, however, who largely dominated proceedings as the hosts struggled to really get going, Tuchel’s men eventually making the breakthrough just before half-time as Timo Werner fired in from Ben Chilwell’s cross.

The German, summer signing then squandered a guilt-edged chance to double that lead from close range, while on-loan Manchester United man Jesse Lingard almost dragged his side level with a dipping volley that went narrowly wide.

Any hope of a fightback was then extinguished, however, as Fabian Balbuena was dismissed in the closing stages after catching Chilwell on the follow-through.

What channel is West Ham v Chelsea on?