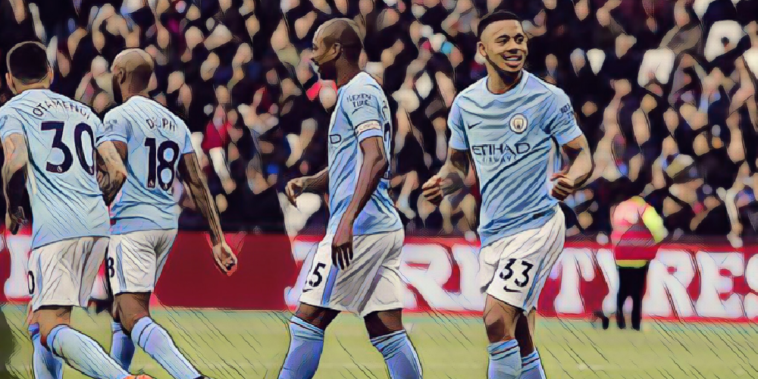 The Hammers suffered another heavy home defeat, this time against the Premier League champions, which leaves them perilously close to the relegation drop zone.

Manchester City simply don’t give the ball away

The Premier League champions enjoyed 75% of the possession during yesterday’s easy win over West Ham at the London Stadium.

This statistic confirms, if any confirmation is needed, that keeping the ball for long extended periods will usually result in a win.

Pep Guardiola’s sides are always easy on the eye and rarely give the ball away, however, yesterday they were playing a very poor side that could and would not tackle the opposition.

The Hammers performance against Manchester City was lacklustre and embarrassing in equal measures, and numerous TV and radio pundits have already branded it a disgrace.

No tackling, no harrying and no urgency was shown by the home side, who still probably need three more points to guarantee Premier League survival.

Manager David Moyes needs to invigorate his team and get them playing with some passion before Saturday’s all-important showdown with Leicester City.

Raheem Sterling should be an England World Cup starter

The player has shown his best-ever form this season and judging by these performances, he should have cemented his place in Gareth Southgate’s World Cup starting eleven.

If he can reproduce the wing play displayed against West Ham, this summer’s World Cup matches will be a delight to watch for England fans. However, I doubt any side at the tournament will be as defensively poor as the Hammers.

West Ham have not reached the promised next level

Although West Ham were playing the Premier League champions yesterday, their supine performance was both disgraceful and hard to watch for home supporters.

Many fans did not want the Hammers to leave their Boleyn Ground home, but the promise of taking the club to the next level to challenge for trophies with the big boys, swayed supporters to back the move.

Unfortunately, the move to the London Stadium has been a disaster, as the athletics stadium lacks atmosphere and inspires no-one except the opposition. If the owners are not careful, their ill-advised move to Stratford could see the Hammers with the biggest and most soul-less stadium in the Championship next season.

Hammers need to be more adventurous

David Moyes yet again persisted with his tactic of playing Marko Arnautovic as a lone striker yesterday, to the annoyance of many home supporters.

Arnautovic was continually isolated and whenever he did get the ball, there was no other West Ham player within 20 yards of the Austrian. Only in the last 15 minutes, when the game was already lost, did Moyes introduce Javier Hernandez as a second striker.

Supporters would have preferred to see the home side go for it, with at least two strikers on the pitch from the start, especially in a match they needed to get a point from. Moyes needs to be far more adventurous for the remaining three games of the season, although judging by his reputation, this is unlikely to happen and West Ham face the real possibility of relegation.