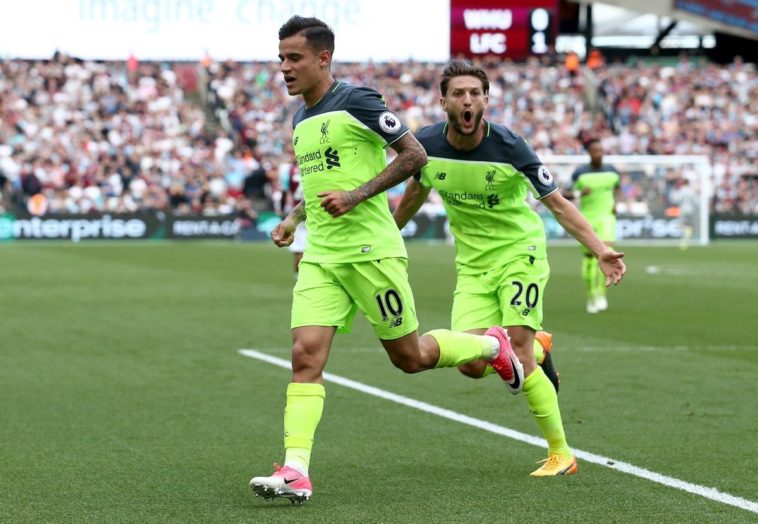 Liverpool beat West Ham 4-0 to move back into third place as striker Daniel Sturridge scored his first goal since January.

Brazilian midfielder Philippe Coutinho then added two further second half goals before Divock Origi fired in a fourth to complete the Liverpool victory.

A win against Middlesbrough on the final day of the season will guarantee Liverpool a Champions League place in 2017-18. The defeat for West Ham means their chances of finishing in the top half are now all but over and they remain in 12th position.

The home side, missing a number of regular first team players through injury, started brightly and could have taken an early lead if a Sam Byram shot would have been more accurate.

However, it was the visitors who took the lead through Sturridge. He collected a Coutinho pass and rounded the Hammers keeper Adrian before slotting the ball home.

Before half time the Hammers should have equalised through Andre Ayew. The Ghanaian striker managed to hit the post from two yards out, and then hit the same post from the rebound.

In the second half, it was Coutinho who was the star of the show as he made the scoreline 3-0 with two fine goals. His first was a shot from the edge of the box and the second was a drive after Georginio Wijnaldum’s volley bounced back off the bar.

The third goal however should have been ruled out. Wijnaldum looked like he had floored West Ham’s Winston Reid with an elbow to the head. The referee waved play on and the home fans and players felt aggrieved by his lack of action.

Their woes were further compounded when goalkeeper Adrian flapped at a high ball and Origi drilled in a fourth.

West Ham have now suffered eight defeats at home this season, compared to just three in 2015-16.

“It was a very difficult season, a very long one. We had many, many obstacles. We needed time to adjust to the stadium but we knew we would.

“We had too many injuries throughout the season, that’s why I would like to give credit to the players.

“I think we will benefit long term from this season and from the knowledge and experience.”

West Ham finish their season away at Burnley on Sunday, while Liverpool host Middlesbrough. Liverpool know that a win against Boro will secure Champions League football for next season.

Man of the Match: Phillipe Coutinho