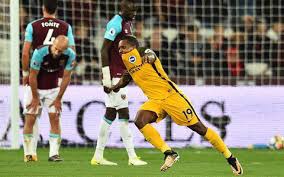 West Ham endured a torrid night against Brighton, losing 0-3 at home. The result ends what had been a decent run of form for the Hammers. Brighton, meanwhile, will hope the result proves to many they have what it takes to stay in the Premier League. Here are five takeaways from tonight’s match.

West Ham showed defensive frailties on a night that saw a changed defence, with Arthur Masuaku replacing Aaron Cresswell. It was, however, Pedro Obiang who was arguably responsible for Brighton’s first two goals. Obiang lost Glenn Murray at the free kick, and allowed Izquierdo to cut inside for the second. More worrying were the angry exchanges between West Ham players after the first goal, with Winston Reid particularly incensed. With cracks appearing within the players’ communication, Slaven Bilic will want to address this as a priority before next week’s fixtures.

Javier Hernandez is West Ham’s top scorer this season, albeit with only three goals. However, against Brighton, the Mexican striker had a big opportunity to cement his place as the lone forward, with Andy Carroll suspended and Diafra Sakho injured. Chicharito was nevertheless unable to take advantage of any of his chances, however slim they may have been. Hernandez will now be viewed as a point of contention rather than celebration, and West Ham’s board may be wondering whether another manager could bring the best out of him.

Marko Arnautovic prompted criticism from Jamie Carragher in the Sky commentary box during the first half. The pundit’s observation that the Austrian was failing to capitalise on his opponent, Bruno’s, lack of pace was astute.

Arnautovic spent much of the game frustrated, but rarely looked to create his own opportunities through runs. Another West Ham transfer to be dissected ahead of next week’s fixtures.

Under Bilic the Hammers have only won after conceding the first goal on five occasions. This statistic manifested itself in disastrous fashion tonight, and will leave many wondering whether Slaven Bilic can instil the fight required in his team.

Though it seems the Croatian is under perennial threat, after a result such as tonight expect the back pages to be dominated with such statistics for the next week.

Brighton’s result leaves their fans in an altogether different mood ahead of their trip back home. The Seagulls consistently impressed in both attack and defence, taking advantage of their shots with good efficiency. The result should persuade many people that they have what it takes to survive this season. Ahead of next week’s hosting of Southampton, this will be a welcome confidence boost.