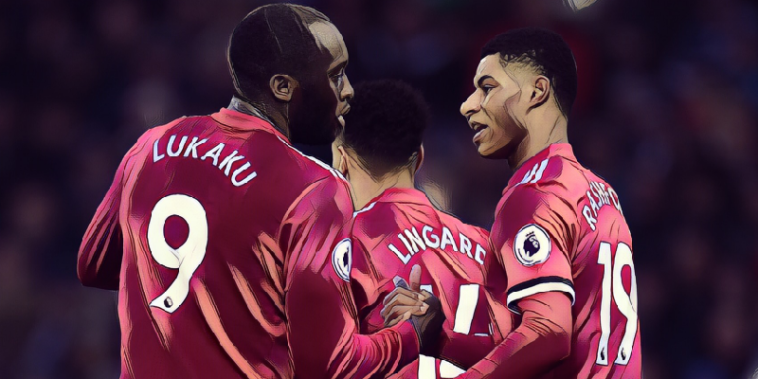 First half goals from Romelu Lukaku and Jesse Lingard were enough for United to see off West Brom at the Hawthorns.

Manchester United held on for a narrow win against Alan Pardew’s side, but will not have inspired much confidence with a relatively pedestrian display.

The Red Devils grabbed the lead in the 27th minute through Lukaku, who expertly headed home Marcus Rashford’s cross from the left. Eight minutes later, Lingard made it two as his shot took a wicked deflection of Ahmed Hegazi, looped over Ben Foster and into the back of the net. United were guilty of taking their foot of the gas, and the Baggies pulled one back through substitute Gareth Barry, 13 minutes from the end.

It proved to be nothing more than a consolation, and West Brom remain second from bottom in the league. Here are five things we learned from the game:

The Baggies have now gone 17 games without a win in all competitions. Their last victory came back in August, against Accrington Stanley in the League Cup. Pardew has a lot of work to do if he wants to avoid relegation. Barry’s goal was their first in four games during December, and Salomon Rondon was largely starved of service.

This can largely be attributed to the poor quality of crossing. Rondon is a big, strong centre forward, who thrives in the air. He was let down by James McClean and Grzegorz Krychowiak’s deliveries in particular, and only began to see a semblance of a chance when Oliver Burke was freed up to drive at the United defence. If West Brom do not actively use Rondon’s strengths to the fullest, they will be relegated.

West Brom’s transfer acumen was lauded when they landed Krychowiak on a season-long loan from PSG. Displaced from the French sides starting line-up, the Pole looked the ideal signing. A strong reading of the game, paired with the drive to prove a point to his parent club, he appeared to be the ideal player to help the Baggies build on their 10th place finish.

Unfortunately, the day Krychowiak signed has probably been his best day in a West Brom shirt. His performances were poor under Tony Pulis, and when caretaker manager Gary Megson dropped him for 19-year-old Sam Field, it represented a personal nadir. He was anonymous today against United, most notable for his poor deliveries into the box. There were few who were surprised when he was hooked for Chris Brunt in the 71st minute.

He may have endured a nightmare during the derby last weekend, but there are signs that Lukaku’s form is turning around. He scored another header today, almost identical to the one against Bournemouth in midweek. Mourinho will be pleased, as the Belgian was presented with one real chance, and took it clinically.

Of course, being able to score against West Brom is one thing, performing against City is a completely differently feat. This is a step in the right direction for Lukaku. The criticism has clearly affected him, as evidenced by his refusal to celebrate either goal he scored this week. His confidence needs to be slowly rebuilt, and this goal will do him a world of good.

One United player who has looked particularly poor this season has been Ander Herrera. At his best, he was a constant thorn in opponents’ sides, hassling and harrying, annoying opponents into frenzies. He would break up play and build counter attacks, serving as a passing conduit in the midfield. With the arrival of Nemanja Matic, he lost his place in the side, and has shown no hint of being able to recover it on a regular basis.

His ball retention has been poor, and he has looked a yard off the pace. He is fourth in the United midfield pecking order, behind Paul Pogba, Matic, and Maroune Fellaini. With the emergence of Scott McTominay, there is a legitimate chance that he may fall further down the pecking order. It will be surprising if he is not let go at the end of the season.

In the two games since their loss to City, United have failed to convince, dragging themselves to uninspiring wins. They look like a team that know that they blew their chance to get themselves back into the title race, and are now struggling to motivate themselves. They cannot afford to let this affect their performances, as the rest of the chasing pack can very realistically reign them in.

The return of Pogba from suspension should inject some swagger and confidence into their forward play. It has become abundantly clear that without the Frenchman, United struggle. Perhaps his return will shake the post-derby blues, and bring some festive joy back to the Red Devils’ play.

CHECK OUT OUR FULL PLAYER RATINGS