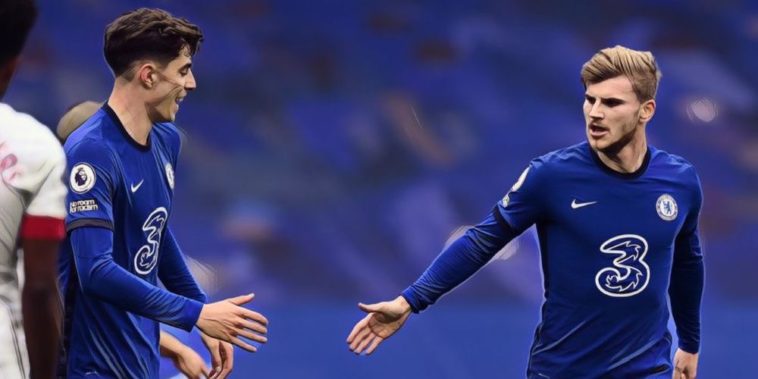 Timo Werner has hailed Chelsea teammate Kai Havertz as ‘one of the most talented players in the world’ and has backed his compatriot to get ‘better and better’ as he adapts to the Premier League.

Havertz became Chelsea’s club-record signing after arriving from Bayer Leverkusen in a £72m deal during the summer, though the midfielder has enjoyed a mixed start to life at Stamford Bridge so far.

The Germany international has scored four goals in all competitions but just once in the Premier League to date, the 21-year-old having been utilised in a variety of positions as Frank Lampard seeks to find his best team in the opening weeks of the campaign.

Werner – who also arrived from the Bundesliga during the summer transfer window – has backed his teammate to improve as he adjusts to a new club and new country, hailing Havertz as one of the most talented players in world football.

“I know Kai very well and I think he is one of the most talented players in the whole world,” Werner told the Chelsea’s official website.

“He is a young boy, only 21 and he can learn a lot but can already play like a very, very old and wise player. I think up until now he feels very well here. A bit like me, we have talked a lot about settling in and he feels he is very happy to be here. In a lot of games he has shown what he can do, what he can bring to the team.

“For Kai it is very important to score, but I think what you can see in his game, he is about a lot more than scoring goals as a midfield player. He plays a lot of key passes, makes a lot of movement for other players.

“He is very talented and feels good. He will get better and better, like me he has come to a new country, language and style of football and has to learn.

“But until now he plays very good and we will see a lot more good games from him.”