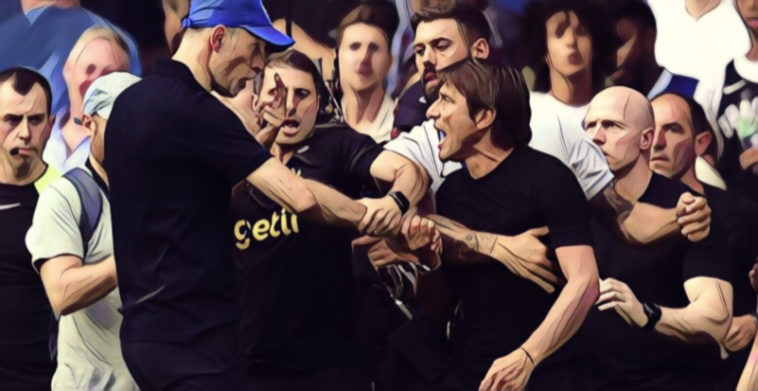 Chelsea were twice pegged back by Spurs as the London rivals played out a hugely entertaining 2-2 draw at Stamford Bridge today.

Thomas Tuchel’s Chelsea side had the better of the opening exchanges and they almost took the lead after 17 minutes, but Hugo Lloris managed to turn Kai Havertz’s powerful low strike around the post. The Blues wouldn’t have to wait long to take the lead though with summer signing Kalidou Koulibaly rippling the net from the resulting corner. Fellow new recruit Marc Cucurella whipped a corner towards the back post and Koulibaly showed wonderful technique to volley home from 14 yards out.

Chelsea continued to perform impressively and their dominance only increased as he first half went on and Spurs boss Antonio Conte will have been pleased his team only went in at the break one goal down.

Tuchel’s side struggled to find that elusive second goal despite their clear superiority, with Raheem Sterling blazing over from close range on the hour mark.

Just moments later and it looked as if Sterling’s miss would be costly when Harry Kane found himself clean through on goal, but the England skipper dragged his effort wide of the post.

On 68 minutes Spurs would equalise against the run of play through Danish midfielder Pierre-Emile Hojbjerg. Chelsea midfielder Jorginho wanted too much time on the ball inside his own box and when it broke to Hojbjerg, he fired a low strike past Eduoard Mendy from just outside the area.

Things got heated in the dugouts as Spurs celebrated, with both Conte and Tuchel shown a yellow card by referee Anthony Taylor.

Tuchel’s frustrations would be short-lived though, with the impressive Reece James breaking forward to put his side ahead on 77 minutes. Spurs’ defence seemed to be sucked over to the left-hand side, allowing Sterling plenty of space and time to slip in James, who fired a powerful finish home with his side foot.

It looked as if Chelsea might score a third in the final stages to cement what would have been a hugely deserved win. However, deep into injury time Spurs talisman Kane would silence the Stamford Bridge faithful by netting his 249th goal for his boyhood club. Chelsea failed to deal with an inswinging corner and Kane rose highest to glance a header into the far corner.

There was more bad blood between Conte and Tuchel which came as no real surprise considering the mutual dislike shared by the two London clubs fanbases.

Speaking afterwards while Tuchel was happy with Chelsea’s level of performance he was clearly frustrated by some VAR calls that went against the Blues.

“It would have been a huge win for us because the performance was absolutely brilliant, the way we played, how disciplined we played, but at the same time the intensity of the ball wins, the effort.

“I’m super, super happy about the performance but unfortunately we didn’t get what we deserved today. I’m sorry to say but the referee had the decisive role today, nobody else.

“There was a huge step up in performance and personality from us, and in the speed of the game. I was impressed actually because I still don’t know 100% where we are and what we can deliver but that was absolutely brilliant and I told the team that. Of course everybody is disappointed now but I think everybody felt how strong we played today.”