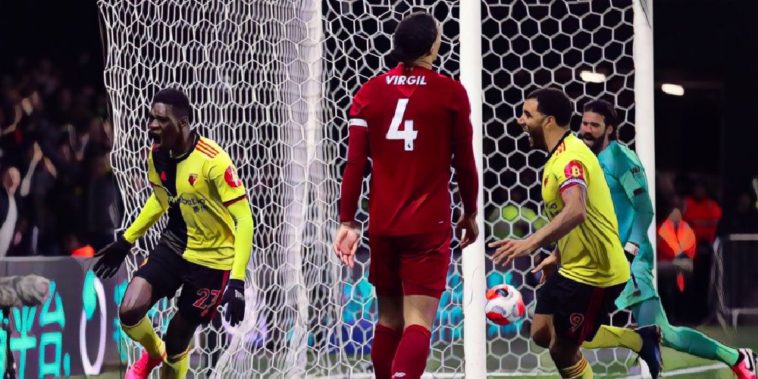 Watford take on Liverpool at Vicarage Road this weekend, in what will be Claudio Ranieri’s first game in charge of the Hornets.

Here’s all you need to know ahead of Saturday’s meeting:

Watford’s promotion-winning coach Xisco Munoz became the first managerial casualty of the season having been relieved of his duties following the 1-0 defeat Leeds United last time out, with the Spaniard shown the door despite picking up a respectable tally of seven points from his first seven Premier League games.

That far from disastrous opening to the season has left many bemused by the club’s decision to part ways, although for many the change in manager was seemingly an inevitability owing to the owners recent history of hiring and firing.

The man to take the club forward will be former title-winner Claudio Ranieri, with the Italian returning for his fourth spell in English football, after previously taking charge of Chelsea, Leicester City and a brief stint at Fulham.

While a repeat of his Foxes heroics is highly unlikely, the Hornets will be looking for the ‘Tinkerman’ to help steer them into the top half of the table, while another assignment will be to provide a more exciting brand of football, with that having been one of the key factors in Munoz’s dismissal.

A clash with Liverpool may not be the ideal start for the 69-year-old at his new club, although he boasts an impressive record against the Merseysiders, having won four of his five home meetings with them across his time in England.

🏟 Claudio Ranieri has arrived at Vicarage Road to face the media for the first time since becoming the new Watford boss. pic.twitter.com/yFKAXFj8tN

As for that upcoming meeting with Jurgen Klopp’s side, Ranieri is set to be without Peter Etebo, Christian Kabasele and Francisco Sierralta, while Nicolas Nkoulou is also set to miss out following his free-transfer this week amid a lack of match fitness.

Liverpool played out one of the games of the season so far in their most recent league outing, having shared the spoils with champions Manchester City at Anfield, after a particularly entertaining second-half battle.

The hosts had been under the cosh in the first-half, yet responded well after the break to take an early second-half lead, with Mo Salah brilliantly teeing up teammate Sadio Mane to slot home and set up what would be an end to end last half an hour or so.

City’s star performer on the day Phil Foden lashed in an equaliser, before Salah got in on the act with a breathtaking individual goal, weaving his way past a sea of opposition defenders and firing the ball past Ederson on his ‘weaker’ right foot.

I could watch this Mo Salah goal all day long, this is insane. pic.twitter.com/YINImU6IsG

That lead lasted just a matter of minutes, however, as Kevin De Bruyne’s deflected effort drew the away side level, although it was Jurgen Klopp’s side who had the best chance to win it, only for Fabinho to his close-range strike expertly blocked off the line by a sliding Rodri.

That result has left the Reds just two points off leaders Chelsea heading into this weekend’s fixture, although they have been dealt a blow in their preparations for their trip to Vicarage Road, with both Fabinho and compatriot Alisson set to be unavailable due to their involvement for Brazil, with the South American nation set to play against Uruguay on Friday morning.

Meanwhile, Diogo Jota is available despite pulling out of the Portugal squad, as is Trent Alexander-Arnold, though Thiago Alcantara is set to miss out.

Watford produced one of the shocks of the season in the 2019/20 campaign, as they powered past eventual title winners Liverpool to end their opponent’s league unbeaten run.

Jurgen Klopp’s side had gone into the match having won their previous 18 Premier League games and were unbeaten in 44, yet came unstuck against their relegation-threatened hosts, with a second-half blitz firing the Hornets to a stunning victory.

Ismaila Sarr netted twice in six minutes to put the home side 2-0 up on the hour mark, with his second goal, in particular, an excellent dinked effort over the onrushing Alisson.

The now-departed Troy Deeney then fired in an excellent third to cap a remarkable evening’s work for Nigel Pearson’s side, although it proved not to be a catalyst for survival as they dropped back down into the second tier at the end of the season.

What channel is Watford v Liverpool on?