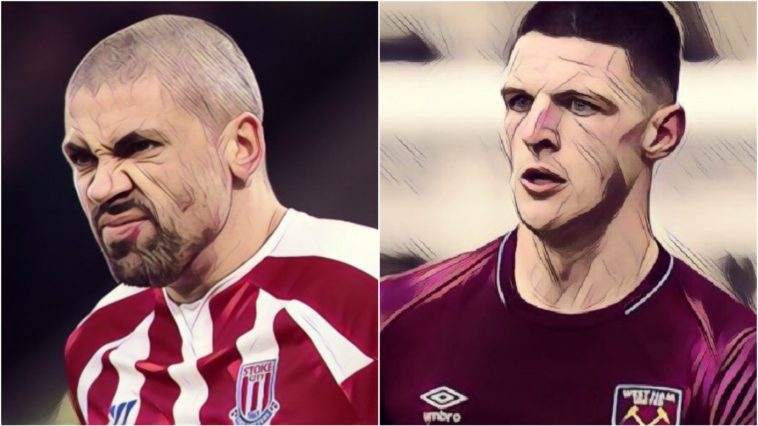 The funniest and best football-related tweets from the week gone by, featuring the retirement of one of football’s nice guys, Spurs new ground, Declan Rice, a sexagenarian Dave Beasant, and nineties Soviet CGI effects.

With no domestic football to keep us busy, this week’s tweets have more of an international flavour to them than usual.

Jon Walters retired from football this week at the age of 35.

I am now retired from playing football

The Irish international, who has struggled with an Achilles injury in recent months, was never the most talented of players, but he won the hearts of supporters for every team he played with his indomitable fighting spirit and, dare I say, pashun.

Even the teams he played against showed their appreciation for Walters.

Fair play, @JonWalters19. All the best for your retirement! pic.twitter.com/AYhdqU7vGt

Truly, one of the most likable figures in football.

So boss, you reckon I can play without my left leg?😭😂 pic.twitter.com/rqc9lCHInm

Wonder if we could make a One Good Leg XI. Bellerin would actually get a game away from Arsenal then.

Anyone else incredibly relieved Alan Pardew is no longer in the Premier League? Or football in general?

Happy birthday to the 1978 Balkan Cup clash between Turkey and Romania, one of the most futile-looking games of football ever staged pic.twitter.com/6uh22uszyh

Soviet television had the jump on Sky Sports in 1990.

A great photo from the 1982 World Cup in Spain.

Was there ever a World Cup finals match played against a weirder backdrop than Poland v Peru in La Coruña in 1982? pic.twitter.com/Q1oSyFUBim

Dave Beasant has not aged well.

We finally got a look at Tottenham’s new stadium this week.

Looks like Spurs will actually move into their home ground before the end of the season.

Spurs’ new stadium is from the year 3000 pic.twitter.com/HZbJstTKro

We couldn’t let this week go without another mention of the West Ham midfielder, only the second footballer to have played for both England and the Republic of Ireland at senior level.

I'd say the English lads were a bit confused by Declan Rice's initiation song https://t.co/v3ViViNdXr

Read: Why there’s no need to lose the head over Declan Rice’s IRA gaffe