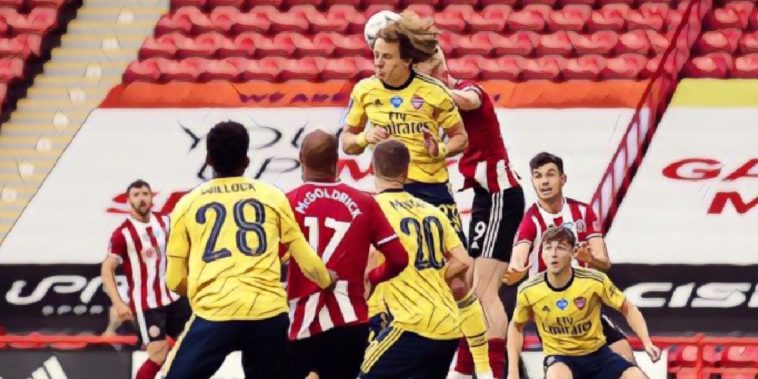 Robin van Persie says Arsenal remain vulnerable from set-pieces and insists the club must sort out the long-standing weakness if they are to compete for trophies.

Arsenal progressed to the semi-finals of the FA Cup with a 2-1 victory at Sheffield United on Sunday, Dani Ceballos dramatic 91st-minute goal securing a last four meeting with Manchester City.

Nicolas Pepe had earlier opened the scoring from the penalty spot before David McGoldrick equalised for the Blades following a long throw-in, and despite snatching victory Van Persie was critical of his former side’s continued struggles at dealing with defensive set-pieces.

“They can hurt Arsenal at set pieces, corners, free-kicks, as you could see,” van Persie told BT Sport.

“It (the first disallowed goal) was clearly offside but if you want to hurt Arsenal somewhere, this is the time to do it, this is the moment. Arsenal are still vulnerable from set pieces. We talked about it four, five months ago.

“If they want to compete for trophies they have to sort that out. They have to find a way to run with their man. You have to follow your man or protect your zone, and they’re still not doing that.”

Van Persie questioned the ‘mental toughness’ of Arsenal’s current defenders and believes their attitudes must change if they are to succeed, using the example of Manchester United greats Rio Ferdinand and Nemanja Vidic as centre-backs who were willing to put their bodies on the line.

“What I believe is very important for Arsenal and for Mikel is they find a way to fix the set pieces against them,” he continued.

“You fix that with mental toughness. It’s like when I played with you (Rio Ferdinand) and Vida (Nemanja Vidic), you would die to save the ball. You would put your head first, you would put everything to block the ball.

“That mentality is needed to compete for trophies, and to be honest I don’t really see that now and that’s not new, we talked about this before and it was even an issue in my time there.

“You need to find defenders who want to do absolutely everything to block that ball. They should try to find those types of defenders.

“I’m not saying these guys are bad, but there is another level up if you want to win trophies.”