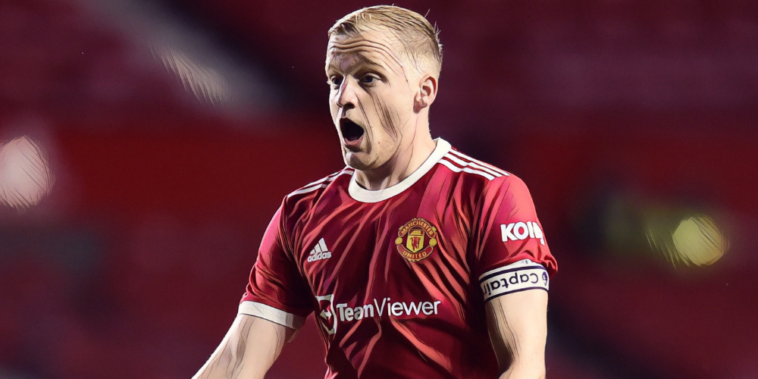 Donny van de Beek has opened up on his Manchester United future, and has discussed his best position in midfield.

The Netherlands international was linked with an exit during the transfer window, but has revealed he has held positive talks with the club’s hierarchy about his role in the squad this season.

“I speak with the manager about it and the club,” Van de Beek told Rio Ferdinand’s Vibe with Five. “They were clear they want me to stay here. The manager was really positive about me and he said ‘I need you and I want to keep you here because what I see every day in training now is a different Donny’.

Van de Beek admits his extended period on the sidelines was difficult, but insists that he must continue to improve and ‘train really hard’ as he bids to win a starting spot.

“That’s so hard, also mentally. It’s so difficult, the only thing you can do I train really hard every day, I try to improve and just wait for your chance. It’s the only thing I can do. If the moment is there I have to be ready.”

The 24-year-old spoke on how he has ensured he still feels part of the squad despite finding himself on the fringes last season, revealing the ‘key’ is to remain positive as he seeks to force his way into Solskjaer’s plans.

“Of course sometimes you’re angry, every player gets that, but you’re not going to show them if you don’t train hard any more, then you give the manager a reason to play without you. I think that’s the key, always be positive.”

Van de Beek’s best position has been a subject of debate since his arrival into the Premier League, with the midfielder having featured in multiple roles.

The Dutchman featured regularly as a number 10 during his time with Ajax, though insists he is comfortable operating in a deeper position as either an 8 or 6 – believing he can feature in the defensive midfield role often cited as a weakness in Solskjaer’s side.

“I think I can [play as a 6] but, of course, I don’t know what the manager thinks or what he expects from me. I’ve played in this role before with Ajax.

This was the Ajax fans' incredible goodbye for their former player! 🔴⚪ pic.twitter.com/FTEgSuMa3F

“Of course, at the end I was playing number 10, but I also played a few games number 6. I can play this role. That’s really difficult to say [my best position].

“That depends on how you play as a team. For how we play, I think the best position for me is a number 6 or 8.

“I don’t care where! I only want to play, so it doesn’t matter where.”